Two years after TT Isle of Man – Ride on the Edge, Kylotonn and Nacon are here with a fresh new sequel. Out for Xbox One, PlayStation 4 and PC now and coming to the Nintendo Switch later, we decided to take their new motorbike game for a spin.

At first glance, Isle of Man – Ride on the Edge 2 feels like a more padded out version of the first game, with a few optimizations that show that the developer knew what could have been improved in the first game. There’s a more involved career mode, a bigger roster of tracks to race on and there are more bikes to climb on.

I briefly played the original game, but found it too difficult to control – something I’ve struggled with before in motorbike sims when I compare them to car racers. Perhaps much like the real thing, little mistakes often proved hard (to impossible) to recover from – which made the game feel less accessible than I wanted it to be. The sequel addresses this, at least in part. It’s still a challenge to control your bike, but I wasn’t constantly wiping out anymore. Instead, with a bit of effort, recovering from a little bump here and there was entirely possible now. In a way, it no longer felt like I was an amateur mounting a professional race bike for the first time, and more like I was assuming the role of a professional racer who had done this before. 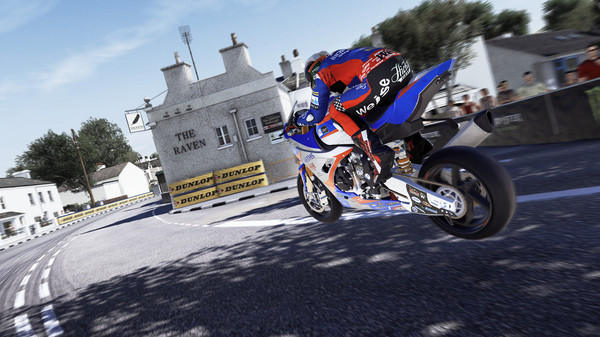 This also allowed me to enjoy the career mode a lot more as well, which was helped by the fact that the mode itself is much better done this time around. Instead of just linear progression, you now have a choice of three different events at any moment in time – with a range of difficulty options attached to them. Going for a more challenging event means you might fail, but it’s also a chance to get bigger rewards. Depending on your skill level, this is a good way to start carefully and then slowly dip your toes into something a bit more challenging as you move through the calendar on your way to the big TT events.

Objectives and challenges can be as easy or hard as you want, some of which will be coming from your own sponsors. Do well in certain challenges and you get a chance to upgrade your bike without having to purchase new parts with your hard earned winnings. What’s fun is that many of these challenges are more arcade-like than the actual races, so they offer a break in pace and intensity as you explore a semi-open area for these events. All in all, this makes for a career mode that is actually engaging to play and not something to skip over in favor of quick single races.

Audiovisually, I was impressed with TT Isle of Man – Ride on the Edge 2. Backdrops are quite varied, from racing through relatively narrow streets inside small towns to enjoying the vistas of the countryside. There are weather effects, your shadow dances around you as you wind your way around corners and change direction, and there’s a nice classic arcade racer feel to the graphics as a whole. The audio is nice as well, with many of the effects being especially convincing when wearing headphones.

One downside of having these long sprawling tracks to race on is that it takes the game a while to load them into memory prior to a race. Luckily many of the events are lengthy affairs, so while the wait times are noticeable they’re not frequent. You can also go online, but the servers haven’t been too crowded yet – I’m assuming people are still playing through the career mode.

TT Isle of Man – Ride on the Edge 2 is a more than competent racer and quite possibly my favorite bike racer in about a decade (I was once hooked on Super Hang-On and Enduro Racer and then Motocross Madness much later), and coming from someone who doesn’t enjoy the real life equivalent that has to mean something.