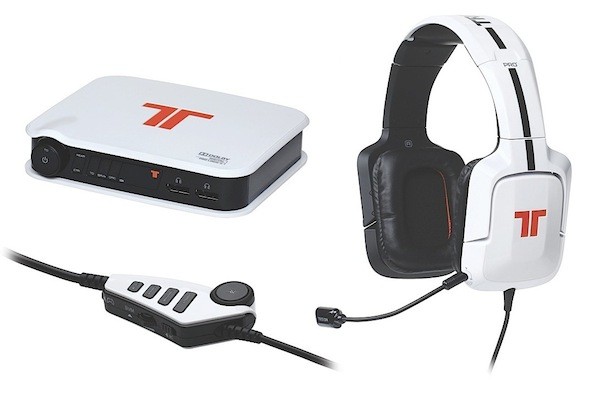 While most ‘surround sound’ headsets opt for virtual surround using Dolby technology, Tritton prides itself on providing true surround sound using four separate drivers per earcup. Constantly raising the bar, their Pro+ tries to improve on the earlier AX Pro headset. Does it succeed?
Looking back at the AX Pro, its critics would often point out that it featured an overly complicated setup with a two power plug requirement, as well as sub-optimal comfort in terms of a bulky frame and inflexible mic. The Pro+ does quite well in fixing these issues, with a redesigned frame, mic and just a single power plug. That doesn’t mean that the setup has become a breeze, but this is an extremely versatile headset that offers connectivity across the board. The padded cups offer passive noise cancellation, but the counterside of that is what your ears will start to warm up after a while – a trade-off that almost all ‘closed’ headsets struggle with.

When we mention full connectivity, we’re referring to compatibility with both PCs and consoles, providing surround sound to X360 and PS3 users as well without the need to purchase separate headset solutions for each system. This is, in our eyes, one of the biggest draws for the Pro+ – it offers excellent audio quality and does so without limiting you to a single system. The only drawback is having to re-wire when switching from system to system, but that’s a small price to pay as long as you don’t have to do so on a daily basis.

No matter what system you’re gaming on, you can use the headset’s in-line volume control to tweak the sound mix for the current audio stream. This means being able to soften the center speaker sound if it’s too overpowering, but it also means you can boost the rear channel if you find that you can’t hear opponents coming from behind. This is extremely useful when you’re in-game or playing a console title that doesn’t support sound mixing. In most cases this isn’t even needed because the default settings work fine, but it’s good to have the option for scenarios that require some tweaking.
In terms of sound quality, the Pro+ delivers excellent results. Audio clarity is good across the whole spectrum, and the headset does just as well with high and mid tones as it does producing low tones. The latter category benefits greatly from the built-in subwoofers, which really kick in during firefights and explosions. You can also use the headset for music, but the results aren’t as good as with a dedicated stereo headset and Tritton’s gaming-oriented approach doesn’t allow for connectivity with your mp3 player either.

What we’re left with in the end is an excellent headset that is ideally targeted at gamers who own multiple platforms and are interested in surround sound gaming without waking up the neighborhood or those looking to play in noisy environments. The audio quality is excellent, and the surround effect more than convincing. Whether or not the headset is worth its price tag is up to you, and if you’re only looking for a one system solution then Tritton has other (and cheaper) options available as well. Having to struggle with a multitude of wires can be a hassle, but we think that not having to buy separate solutions for individual systems is worth the extra effort. If regular stereo doesn’t cut it for you anymore and you want to take the surround experience with you across different systems, then the Pro+ is the best option we’ve seen so far.