The SteelSeries 9H was released at roughly the same time as the Siberia Elite we checked out earlier and both are high performance gaming headsets. So how are they different and which headset should you go for? Our review focuses on these questions and more as we check out another high quality offering from SteelSeries.

Despite being a high performance headset in roughly the same price range as the Siberia Elite, the SteelSeries 9H looks vastly different. With a sleek and elegant black design, this is far removed from the “in your face” design that signifies the Siberia Elite. Whereas that headset offered virtually limitless amounts of color schemes using a built-in led system, the only color that is visible in the 9H is the orange stitching around both earcups. The inside of the earcups is also bright orange (making the headset very recognizable as a SteelSeries product), but it is a very subtle look when worn. Despite this, the earcups feel like they offer more room for your ears than the Siberia did. The headband on the 9H doesn’t use a suspension design, but instead opts for four soft and small cushions that we found to be extremely comfortable even after long periods of testing.

Under the hood, we find quite a few similarities with the Siberia in terms of connectivity and software support. The 9H also features the a v2 USB soundcard from SteelSeries, which offers high quality audio support for pc or laptop owners not willing to settle for their on-board option. An added bonus when using the USB soundcard is the option to use the SteelSeries Engine 3, SteelSeries’ software solution that works for a multitude of their devices. For the 9H it offers several pre-defined equalizer profiles, but it also enabled the Dolby Headphone option which simulates 7.1 surround sound despite of the fact that the 9H is essentially a stereo headset. 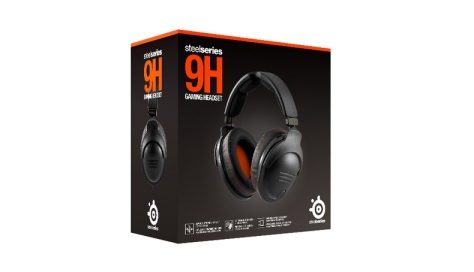 SteelSeries did not limit the use of their headset to people connecting it through USB, but has provided a small assortment of cables that vastly improve your connectivity options. Those who prefer using on-board audio or their dedicated soundcards can do so using standard 3.5mm jacks for headphone and mic input/output, whereas another cable does away with the mic connector to provide compatibility with portable mp3 players and cellphones. Because of its elegant and subtle design, we found this to be a big plus as the 9H easily blends in when away from its ‘gaming’ origins.

For all this versatility to be a viable option, the headset would also have to perform well in terms of sound quality in a variety of scenarios. We’re happy to say that we weren’t disappointed in this regard. Our primary tests focussed on gaming, using both stereo and simulated surround modes. While virtual surround works to a degree, it’s not the same as using a surround sound system with speakers – you lose a bit of the audio fidelity and the positioning effects aren’t as strong either. However, there are plenty of scenarios where using speakers just isn’t an option and that’s where this headset offers a good alternative. Switching to stereo is where the 9H shines in gaming, because its 40mm drivers (combined with some excellent passive noise cancelling) provide a richly detailed sound – especially when using the right EQ settings. 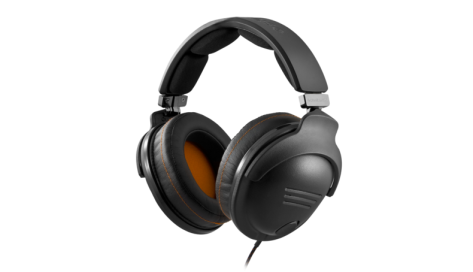 Disconnecting the headset from our PCs and trying our luck with several MP3 and hi-fi solutions brought us mixed results. Without tweaking any settings, the 9H would sometimes sound less rich and detailed than we’d like, but its drivers are powerful and versatile enough to remedy this. Still, for regular music listening on the go or using a hi-fi setup, the 9H is merely a good headset but not a great one. The good thing is that the 9H also doesn’t pretend to be – its core audience is the competitive gamer, and the versatility is just a welcome bonus. In terms of build quality, comfort, audio quality and user options, this is an extremely well-rounded set that is hard to fault. It compares well to Razer’s Kraken, but doesn’t depend on a USB connection – another plus. If you’re looking to impress onlookers while still enjoying quality sound then check out the Siberia Elite, but if you’re a gamer looking for an audio solution then be sure to check out the 9H. Highly recommended!