Formerly known as True Crime: Hong Kong, Sleeping Dogs was abandoned by Activision in 2011 for not living up to their standards for the open world genre. In a market dominated by titles like GTA, they felt there was not enough room for success with the United Front Games title that combined driving and gunplay with the hand to hand combat you would expect from an action title set in Hong Kong. Square Enix subsequently picked up the game and renamed it, and now that it’s ready for release we’re about to see who was right. Sleeping Dogs is available for X360, PS3 and PCs – we tested the X360 version.

Playing as Wei Shen, you’re tasked with infiltrating the Sun On Yee triad. As is typical in games of this nature, you start out with introductory missions that teach you the ropes before you climb within the ranks of the triad and earn their trust. These tutorial levels definitely come in handy, as the game offers diverse gameplay styles that you all have to master to some degree in order to successfully complete your mission to take down the triad. As you progress towards that goal, you’ll find your character going deep into his undercover role, perhaps even too deep. It’s all pretty standard Hong Kong action movie stuff and the game won’t win any awards for being original here, but the story is delivered in a convincing manner and presented well with a fluid mix of English and Chinese voice acting.

One of the gameplay styles that is explained early on is hand to hand combat, which is not too far off from the excellent combat we saw in the recent Batman games. A nice twist is being able to use the environment to a larger extent, as you can toss opponents over balconies or even impale them on objects you wouldn’t expect to be used that way. It makes brawling even more enjoyable, and as a key feature in a Hong Kong-styled game it is good to see that they got it right for Sleeping Dogs.

After completing the initial missions that serve as tutorials and drag you into the storyline, you’re left to your own devices as you explore Hong Kong on your own. But although there is a large degree of freedom here, the game is best enjoyed sticking fairly close to the main storyline. Of course this is a matter of personal preference, but my opinion is that I quickly lost track of my character’s undercover persona when I started exploring freely. The game does a good job of keeping the main storyline diverse though, so you’re constantly mixing driving, shooting and on-foot combat.

The driving aspect is also done well, with high octane chases and destructive mayhem combining well with the “in your face” style of the brawling scenes. Though not done as well as the vehicular carnage in Ridge Racer Unbounded, the driving missions can definitely stand up on their own. With easy to access controls and plenty of diversity in the scenery, you’ll find yourself chasing someone on open roads one moment and squeezing through an alley the next. 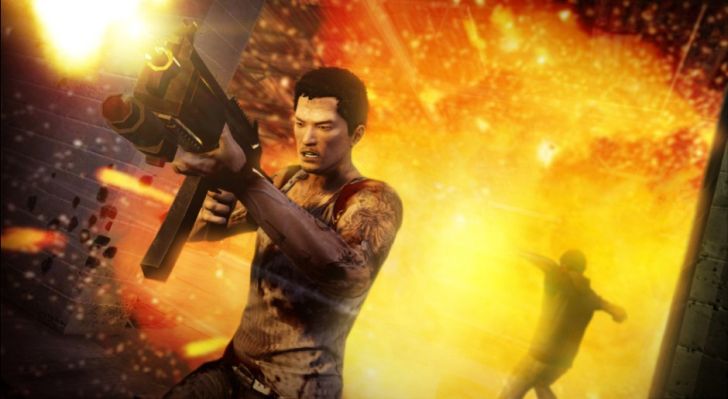 Just as the driving reminded me of Ridge Racer and the combat reminded me of Batman, so did the other elements of Sleeping Dogs. There’s Max Payne-esque bullet time, a cover system you’ve seen in many third person action adventures and the setting is not too far off from Shenmue. But while that may sound like criticism, I want point out that all of these elements are extremely well done. Sure, if you’re only interested in driving there’s better games out there, but that’s the nature of every sandbox game.

So at the end of the day, Square Enix has a winner on their hands here. The transitions between gameplay styles are fluid, the combat is satisfying and the story is engaging for anyone who is interested in the typical ‘undercover cop’ action movie fare. Every so often you can see the limits of X360 hardware in a lack of environmental detail, but I’ve been told the PC version has extra features that crank up the level of detail. That’s not to say the X360 version looks bad, as it portrays Hong Kong and the seedy triad life in a convincing way.

Highly recommend; my thanks to Square Enix for picking this up when Activision abandonded it!