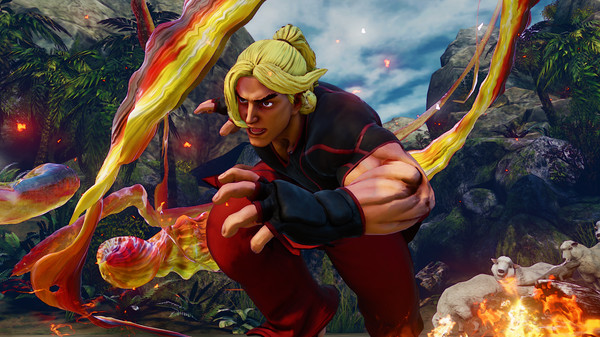 Platform-wise, Capcom caused a bit of a stir when they announced that Street Fighter V was going to be a console exclusive to the PS4 (it has also been released on PC, but not Xbox One). Part of this has to do with Sony (and Microsoft) considering their latest console as a platform – not just a a system. Capcom’s Street Fighter V is remarkably similar in that approach, because this month’s release feels a bit like a fighting game platform rather than a full blown fighting game.

Make no mistake – Street Fighter V is an excellent game, and it has some of the best fighting dynamics we’ve ever seen, but we’ll address our concern later. Let’s focus on what’s great about Capcom’s new fighter. In many ways, it’s similar to Street Fighter IV – the 2.5 art style is refined and even more detailed now that the PS3/360 generation has been left behind, but it’s still extremely recognizable for fans of the Street Fighter IV games.

Also unchanged is Street Fighter’s celebrated balancing system – not a single character is over- or underpowered, and if you feel like one is then you’ll attribute it to either your practice sessions with the character or the lack thereof. The roster contains 16 fighters right now, including series favorites like Ryu, Ken and Zangief as well as newer additions like F.A.N.G. and Necali. I have no doubt that the number of characters will grow over time, but 16 characters is plenty for now and there’s a lot of diversity among them. Sure, Ken and Ryu will always be a little similar, but the rest of cast is very distinct. F.A.N.G. relies on projectile attacks and poison, while hitting Zangief is like hitting a tank.

Another great aspect about the Street Fighter franchise is that the games have always been easy to pick up, yet hard to master. Once you start stringing together some moves, you start winning battles – sink another few weeks into, and you’ll find yourself winning more and more of them, especially when you start unloading Street Fighter V’s new “V” powers.

The V is for Variable, although it plays into the game title rather nicely as well. They come in three forms: triggers, skills and reversals. All of them make use of a new bar that you fill up as you fight, but they have different functions. Skills are relatively basic moves, but always relate directly to a character’s unique characteristics. Triggers, on the other hand, are sort of like what the Hulk is to Bruce Banner – it changes your character to give them new strengths and abilities. Reversals, as the name suggests, are defensive in nature – allowing you to break free from an ongoing attack or combo.

It’s a dynamic where it’s not strictly necessary to master it in order to win, but you’ll find winning a lot easier when you do – and it adds tactical depth to battles as well. When playing online, which works well despite some launch day hiccups, V-powers become especially important once you start climbing the ranks and face off against some of the real Street Fighter veterans. As you get better, you also gain more “Fight Money”, Capcom’s in-game currency for Street Fighter V. This allows you to unlock (future) characters, among other things – keeping the game interesting for a long time to come.

As a fighting game, Street Fighter V is wonderful. The core gameplay has evolved from IV in a number of ways, while retaining everything that was good about the previous generation of games. Street Fighter V is also a platform though, as we touched on earlier. What we mean by that is that in terms of content – the game is in need of additional game modes and feel like it’s not all that it can (and will no doubt) be at the moment. The story mode will not feature a cinematic campaign until an update later this year, spectator mode hasn’t been added, and only small lobbies are available at the moment. The good news: this isn’t a ploy to make you pay for these as DLC updates. The bad news: these should have been in the game already to elevate the package from ‘very good’ to ‘brilliant’. Should you get it? Yes, definitely. Should you get it right now? If you can’t wait, sure…. if you can, wait a month or two for the content to flesh out a little. Either way, you won’t be disappointed – Street Fighter V is a wonderful new entry to the series and Xbox One owners are missing out.