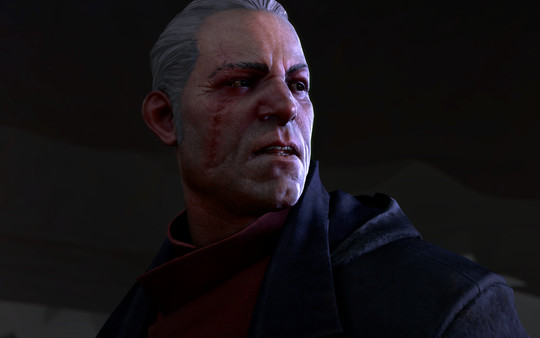 Dishonored – Death of the Outsider is Arkane’s standalone new entry in the Dishonored franchise. Out for Xbox One, PS4 and PC, we reviewed the PC version of the game.

Despite all the critical acclaim, Dishonored 2 didn’t really receive the commercial success that it deserved. Perhaps because of that, the additional DLC story content that we were hoping for (based on the post-release DLC schedule for the original Dishonored) wasn’t announced for quite a while. When the announcement came, it wasn’t a Dishonored 2 DLC either – but rather a standalone adventure that takes place inside the Dishonored universe. It’s more closely tied to Dishonored 2 though, as the “game plus” option demonstrates that lets you play the game with the powers from that game. It’s billed by Bethesda as also being a starting point for newcomers to the series, but it feels more like a grand finale to me.

In Death of the Outsider, not surprisingly perhaps, your main task will be to take out the Outsider, a shadowy figure who features in both previous Dishonored titles as well. Granting supernatural powers to inhabitants of the game world, he disrupts the balance of things as a driving force behind many, mostly darker, events that take place inside Dishonored’s game world. You’ll be attempting to take him out as Billie Lurk, a female assassin who we previously saw in the Knife of Dunwall expansion for the first Dishonored.

Billie Lurk joins forces with her former mentor Daud in doing so, but Daud’s poor health makes sure that it’s Lurk who will be doing all of the heavy lifting. Their personal reasons for wanting to take out the Outsider are laid out through the game’s narrative structure, which also does a great job at character development for both Daud and Billie – hardened killers who are looking for remorse and see the Outsider as a means to this end.

As with any Dishonored title, you have a variety of abilities at your disposal – though Billie’s main powers (Displace, Semblance and Foresight) are new to franchise and playing with the “old” powers will require you to unlock the “game plus” option. Your new powers are fairly familiar to those who played the previous games though – Displace is a teleportation move, but functions a little differently than what you’re used to. Here, you essentially set up a “save spot” that you can teleport back to when the going gets a little too tough. Alternatively, you can set up such a spot along an enemy patrol route and teleport in behind them – or even into their bodies as they pass over it (which doesn’t end well for them).

Unlike the previous games, you won’t have to hunt for potions to be able to use your magical powers. Here, your power bar automatically recharges which helps in keeping you on point when it comes to your objectives. It’s balanced well, because while it initially feels like it makes things easier the difficulty level ramps up to be in sync with the new power system.

Another change in Death of the Outsider has to do with how your actions affect the game world and which of the possible endings you get as a result of it. Perhaps because you’re working towards a very specific goal in this standalone chapter, this system has been removed and your actions have little effect on the outcome of the game. I thought this was a shame, because the difference between a stealthy approach or an all-out action approach now feels far less meaningful.

Length-wise, Death of the Outsider is shorter than Dishonored 2 was but quite a bit longer than any of the DLC expansions that came out for Dishonored. Price-wise I would have expected a bit more content than what’s on offer, but the quality of the expansion is top notch. Besides the main quest, there is also a good amount of side missions that you can take on – and none of them feel like standard fetch quests or otherwise generic missions. The same can be said for the enemy designs – not just repeating old content from Dishonored 1 and 2 but rather adding new faces into the mix. Mission design feel, at times, a bit uninspired though – they’re still great and offer replayability, but generally lack the wow-factor that we felt in the first two games.

Death of the Outsider doesn’t feel radically different from what came before it, but it’s an excellent new chapter in a franchise that has stood the test of time. It’s been about five years since the original Dishonored, and we’re hoping that this isn’t the last we see of the franchise. It’s a tad on the short side and plays it safe, but Dishonored fans definitely won’t mind – they’d be missing out if they didn’t pick up Death of the Outsider.