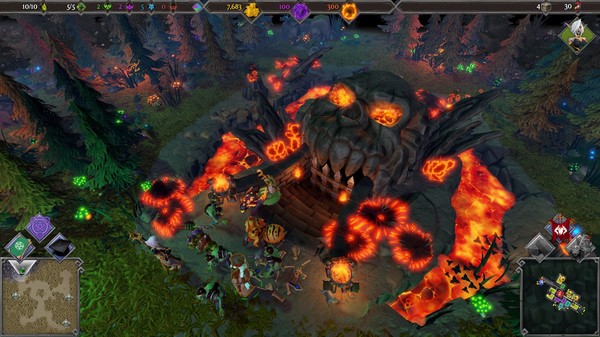 The third entry in Realmforge’s Dungeons franchise has been released. Although Dungeons 2 received console conversions after a few months, part 3 is a multi-platform release at launch. We tested the PC version of the game.

Instantly familiar to those who played previous entries in the franchise, Dungeons 3 picks up right where the last game left off. As “the ultimate evil”, you’ve now recruited a dark elf called Thalya as a new commander for your troops. These troops now consist not only of orcs and goblins, as you can also make use of demonic and undead forces in your army. Your aim is still quite similar though: become the master of an underground dungeon before venturing to the surface and taking out the forces of good that dwell up there. The latter plays out as a real time strategy game, whereas the dungeon portions of the game are still as Dungeon Keeper-inspired as it was before.

Nothing too radical has changed, and this is something we’ve come to expect from Kalypso as a publisher. They tend to stick with their franchises and developer and let them gradually improve them so they can realize their vision over time. We’ll see a Tropico 6 next year, and Dungeons 3 is another good example. The game feels more refined than Dungeons 2 did, especially when it comes to how the dungeon and overworld gameplay is balanced out. You’ll need to switch between the two frequently and dynamically and they are an integral part of progressing and winning, whereas it felt like a “one before the other” kind of structure in the previous game.

This is mainly due to the revamped RTS mode that governs your overworld activities – it’s bulkier and meatier than before, with more troop types and strategic options available to you. It’s no Dawn of War III, but it’s clearly better than what we saw in Dungeons 2. The other half of the game, which plays out in the dungeons, feels far more familiar – with the exception that dungeons are now randomly generated. This helps keep the experience fresher, but it can’t hide the fact that missions can feel a little repetitive if you’ve been playing for hours.

Realmforge seems to have realized this, and has added more variation to its mission goals and objectives this time around. In some missions you’ll be forced to play by making quick decisions, while in others you’ll have to start out playing defensively for the first part of the mission to prevent your dungeon from crumbling. The way that missions are structured is another way in which this is a franchise that has been allowed to gradually improve over time, since the game is better for it and repetition doesn’t set in until much later because of it.

Playing with more unit types also helps in this regard, and after two games (and a few expansions) of playing mostly with orcs and goblins it’s great to see what the undead and demonic forces can bring to your army. It’s not that a big of a game-changer as the inclusion of the overworld was, but it definitely helps instill a sense of discovery into Dungeons 3 as you figure out which units are best equipped to which tasks.

The campaign leaves plenty of room to experiment with this, since it took about 16 hours to get through all twenty missions. The game’s narrator and new addition Thalya also add a bit of personality to the proceedings, and without them the campaign would probably feel more like the game’s skirmish mode. The campaign’s variety of objectives and narrative delivery make it the game mode that’s most fun to play though, and Dungeons 3 is the best that the franchise has had to offer so far. Recommended.