Games like Pierhead Arcade were a dime a dozen back in the Wii’s heyday. After the introduction of its motion controllers, game designers were eager to use them for the purpose of controlling a wide array of minigames. Wii Sports was immensely successful and set the trend, a ton of other titles have faded into obscurity. The Playstation 3 has its fair share of similar games thanks to the introduction of the Move controllers, but they too faded out of sight for a while.

That lasted until the release of the Playstation VR headset, which uses the old Move controllers in tons of games – often providing the most immersive way to play. Pierhead Arcade is no different, as you’ll be controlling its collection of 15 classic arcade games with a pair of Move controllers. This makes sense because all of these games are mechanical/non-digital in nature, and you’re not playing classic Atari titles in this arcade. 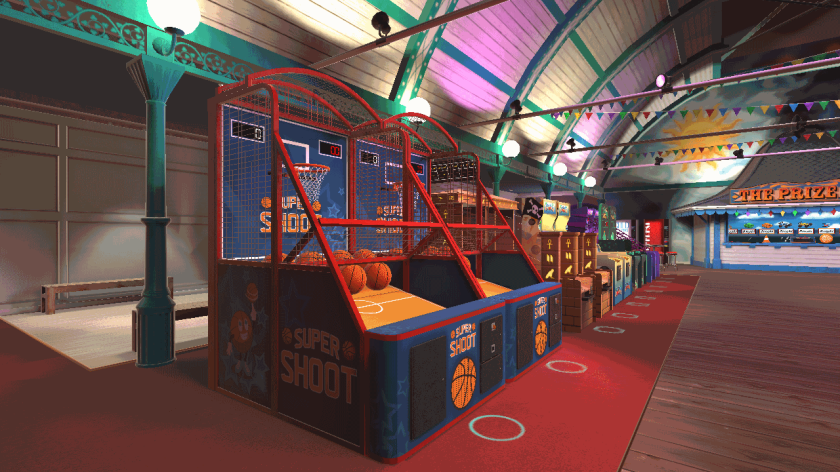 Instead, the focus is on familiar favorites, many of which involve some kind of throwing mechanism. Sinking basketballs into a net, aiming at openings in a wall or bouncing a little ball into a hole, they’re incredibly old school experiences that still have a lot of (short term) charm. Other games include whack-a-mole, bowling, a game where you punch targets and two shooting gallery games. None of the games are the kind of affair you’ll spend a couple of hours with, but alternating between games is an easy way to pass the time and have some casual fun. There’s some skeeball and shuffleboard action here as well, so there’s something for everyone it seems.

Unfortunately, all the action is currently for single player gameplay only – a multiplayer update is still planned. This is a shame, because a lot of the fun that comes out of these games in real life is impressing others with your skills – which is an aspect that is now missing. I’d also appreciate more game variations for the various games to keep things interesting. This might be hard to do for some of the simple throwing games, but the shooting gallery games and bowling feel like they have some untapped potential. Doing well at some of the games yields you tickets that you can spend on various gadgets, but unfortunately they don’t unlock anything new in terms of gameplay.

The move controls generally work well, although getting a good “feel” for the throwing games is difficult. Many of the games can be played just fine while sitting down, but bowling is a lot more fun standing up, as is basketball. None of the games are difficult to control though, which makes this a nice option when you want to casually show off your VR setup.

With so little to choose from in the genre, Pierhead Arcade is a fine addition to the Playstation VR library. So far there’s only Carnival Games, and perhaps Sports Bar VR, when it comes to minigames. It’s nice to have another option, even though it doesn’t break any new ground and sticks to being functional, both in terms of gameplay and its presentation. Luckily, it’s price tag represents this.