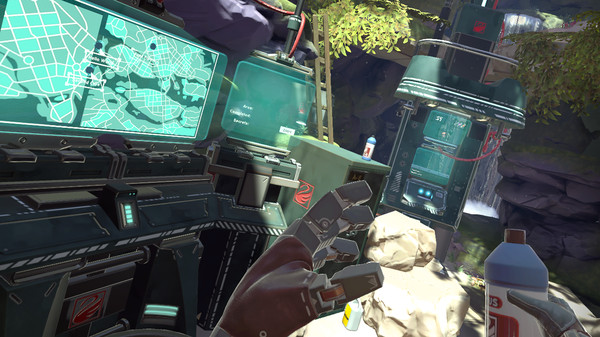 Playstation VR is looking to have another strong year in 2018 – tons of games keep coming out at a steady rate, with at least two or three titles each week. For a while it looked like things were moving towards quick conversions of existing Oculus/Vive games, but there are plenty of quality games out just this month alone. Sprint Vector was excellent, Moss is very promising and Apex Construct doesn’t disappoint either. 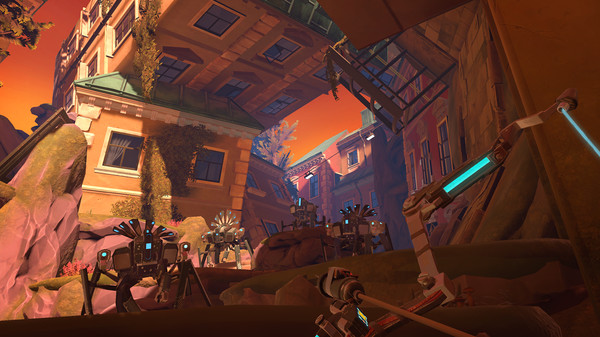 It’s a title that was a bit of a mystery around the office as to the nature of the game. Based on the title, we actually had someone convinced this was going to be a lot like Fantastic Contraption – a physics/building game. It is in fact far more unique a title, and one in which I really enjoy the setting. Set in a post-apocalyptic future where robots, machines and AIs rule the planet, you are a rare human survivor. It’s the kind of Terminator: Judgment Day setting that many sci-fi fans love, but Apex Construct looks nothing like the Terminator franchise – instead of dark, dreary tones, Apex Construct’s version of the future features a ton of color for a very attractive environment.

As the adventure unfolds, you find out more about what happened and how you might go about taking back control from the machines. Some of that will involve direct confrontation through combat, during which you use a bow to shoot your enemies – using a motion very similar to another PSVR title, Ace Banana (and for those with a PS3, Sports Champions). This works well and it’s fun, but it also shows the limitations of the current generation of Move controllers – moving around, especially when the action gets going, is tough and can get frustrating. The Inpatient “solved” this by keeping the action at a pedestrian pace, and games like Farpoint and Doom VFR have support for the Aim controller in place. Apex Construct is too complete and multi-faceted a game for it to not run into trouble during combat. Besides shooting, you’ll want to dodge, block and move into good positions to do so, but it seems like too big of a challenge with a pair of Move controllers. 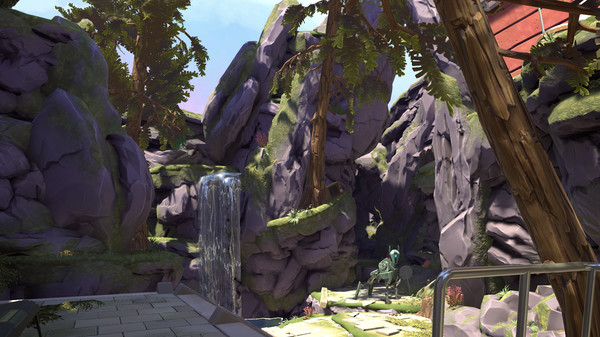 Luckily, this problem only really applies to the combat sections of the game. A good part of Apex Construct is spent exploring the environment, solving puzzles and absorbing the narrative. These often go hand in hand, as puzzles might require hints or items you have to gather from the environment around you. As you and the narrative develop (through the story and by buying upgrades), you’ll also gain access to areas you previously couldn’t enter. There’s some smart game design at work here when it comes to the actual adventure, which kept me thoroughly engaged for the entire game despite the combat woes I had.

With attractive visuals (which sometimes look like a classic 3D platformer and then turn sci-fi as you try to hack terminals to solve puzzles) as well as excellent writing, Apex Construct is a sci-fi adventure well worth undertaking. It’s too bad the combat scenarios can turn frustrating due to some control issues that can’t really be helped, but the rest of the game more than makes up for it.