Time for part 2 our of our three part feature on the big Games Workshop releases of 2017 and what they’ll bring to videogaming in the near future. We’ll focus on Warhammer Underworlds: Shadespire this time, which in my opinion is the best entry point for those who are new to the Games Workshop board game experience.

The second big Games Workshop release from 2017 that I’ve been playing with quite a bit was Warhammer Underworlds: Shadespire, and it’s a very different game for a number of reasons. It comes in a much smaller box so it’s a lot more portable, but it also doesn’t need as much space and is much quicker to set up for an initial play session. Where other games can take you hours upon hours of time for assembly and painting, Shadespire features a relatively small amount of components to put together so you can be up and running in under an hour. That’s assuming you’re not painting first though, and are happy to play with the “red team” and “blue team” instead. Either way, you’ll also quickly notice that an individual game of Shadespire only takes you about 30 to 45 minutes – another difference with some of the biggest Games Workshop titles where games can go for up to two hours.

Warhammer Underworlds: Shadespire is a two player game, although buying additional playsets would enable you to play with three or four as well. Since I just played with the core set, it was a 1 vs 1 deal each time – but the game would rarely unfold in the same way twice and I would dare say that that’s where the game’s greatest strength lies. Shadespire isn’t just about seeing the other warband and taking them out any way you can (which would quickly lead to doing what worked before), it’s about objectives that may or may not involve an aggressive strategy.

The way this works, and the randomization is introduced, is a card deck based system that gives you powers and objectives – as well as the luck of the dice in how you execute your actions. As such, tactical decision making is a big factor in the game, with strategic unit placement and movement being crucial factors to success – fail there, and you’ll likely lose the game. With the decks included in the core set you already have a staggering amount of possible combinations (with different powers and objectives each time), which definitely reinforces that “let’s play one more” feeling.

As per the norm, only two warbands are included in the core set – the Stormcast and Khome. The Stormcast characters are stronger, but you only get three of them. Your adversary, playing the Khome, gets five characters. All characters are placed on a board with hexagons and a flat surface – there is no verticality here unless you count the possibility of using blocked spaces to avoid getting hit with ranged attacks.

Because the Stormcast overpower the Khome in 1 on 1 combat, you’ll need different tactics when playing as the Khome warband. It also means that the game feels slightly more forgiving when playing at the Stormcast warband, though this is a feeling that stems mainly from inexperience. If there’s a stronger or more experienced player between you, odds are that it’ll not take him too long before he becomes comfortable with the tactics that the Khome warband can use to win – and sometimes that means avoiding combat or positioning yourself in such a way that your weaker units can band together and take down one of the Stormcast. 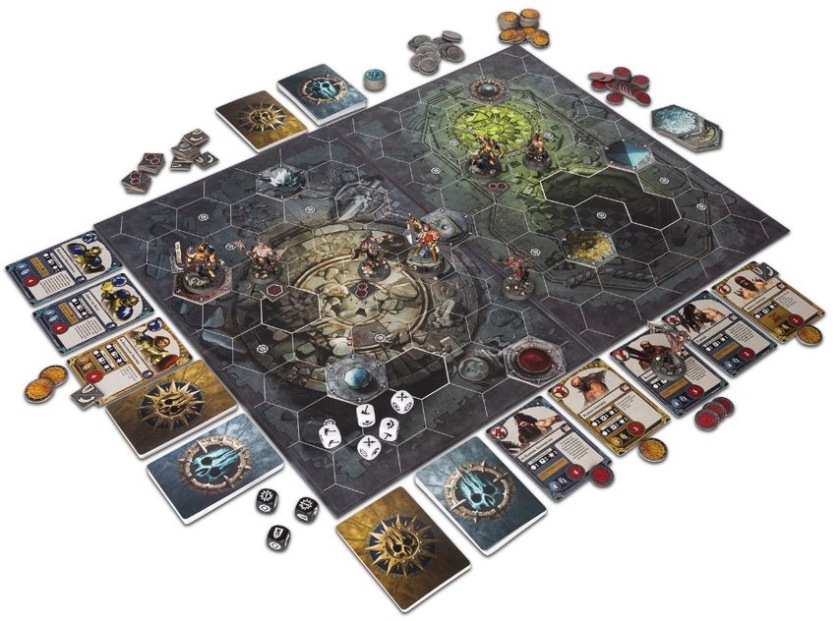 Since every Warhammer Underworlds: Shadespire game has a limited number of turns, you know what you have to work with in terms of planning, plotting and scheming. What this also means is that every move is important, and every mistake can quickly become fatal. You’ll learn some of these through trial and error, as you get better at positioning your units during subsequent playthroughs. When playing Stormcast, you’ll learn to drive the Khome away from objectives on the board – just like how you’ll quickly learn about the vulnerabilities that the Khome have and what situations they should steer clear from.

Which brings me to what I like best about Shadespire – it’s a game that makes it easy to draw new players in. There’s a relatively short rule book (for Games Workshop standards), games aren’t overwhelmingly long and it’s easy to grasp why a game was won or lost – and learn from that before you start over again.

It may not have the kind of deep lore that some Games Workshop titles have and can build entire narratives around (though you can read about the former glory of the city of Shadespire), I found the actual game to be a lot of fun – which each game being rewarding as you learned from it and evolved your tactics further. As such, Shadespire would be a great candidate for a videogame version – but to our knowledge there are currently no plans for one. If they do make one, I could see them doing either a straight up conversion of the board game (which would even work on mobile devices) or turn it into a 3D adaptation closer to Mordheim. Perhaps it’ll depend on the direction that Games Workshop takes with the board game – we’ve already seen extra sets of miniatures with their own rules, but maybe we’ll also see the narrative expanded in the future, or a way to play a campaign over several games. Either way, if this one goes digital, I’m going to be playing it.

Read on for part 3 of our three part feature on Games Workshop or go back to part 1 and read about Necromunda: Underhive if you haven’t already.