The very popular TO THE TOP by Electric Hat Games has finally been converted to Playstation VR. Does it live up to the stellar reputation it earned with its Steam version?

The VR platformer genre has been an interesting one. One of the very first games in the genre I played was Lucky’s Tale, which was a pretty traditional 3D platformer which used VR for a couple of neat effects. This year’s Moss was also fairly traditional in its platforming gameplay, but was extremely innovative in how it used the VR perspective and clever control mechanism. Both games kind of play it safe though, and then there are games like Sprint Vector and TO THE TOP.

Both titles were bold enough to take on something that many considered to be impossible to do in VR in a comfortable and fun way: first person, high speed running and jumping. Though somewhat similar, they offer different approaches to this. Where Sprint Vector features more of a race/battle element with laps to complete, the campaign mode in TO THE TOP is more about time trials and finding the quickest way to the finish line.

In TO THE TOP, you don’t play as yourself, but rather as a pilot for a superhero robot who engages in a series of training exercises to prove your worth. You progress by meeting certain predefined goals, with a gold-silver-bronze kind of dynamic we’ve seen before in plenty of racing games. The game can be controlled using either the dualshock gamepad or a set of move controllers – which is infinitely more fun to do. The biggest reason for this is that TO THE TOP emphasizes climbing way more than a game like Sprint Vector ever did – and reaching for (blue) surfaces while climbing is just a lot more fun when you’re actually physically grasping for them.

Speaking of which – TO THE TOP isn’t as much of a workout as Sprint Vector is, and with the summer approaching I’m glad it isn’t. While Sprint Vector had you moving your arms back and forth to propel yourself forward, TO THE TOP lets you jump forward using the trigger buttons. You’re also not constantly in motion like in Sprint Vector, but rather control your pace by grabbing for ledges – which you’ll (need to) get better and quicker at if you want to beat the target times. This changes a bit later on, when you hit other surfaces or try gloves that allow you to fly, but the pace in this game is mostly less hectic than the one in Sprint Vector – making this a more user-friendly experience for those not too great with motion controls. 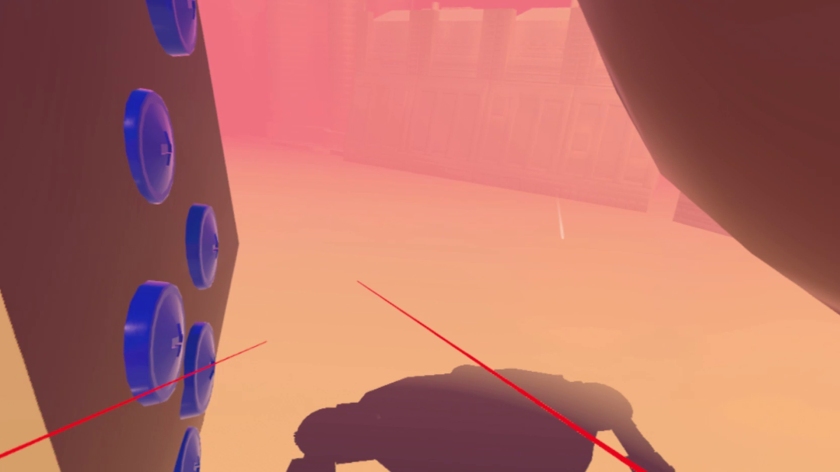 There is plenty of content in TO THE TOP to enjoy, with a massive 35 levels to play in the campaign mode (and plenty of replays to find alternate routes and beat better target times). You can play the same levels in online multiplayer as well, where you don’t need to unlock them like you do in the campaign mode (but it pays to play the campaign mode first to help you with the learning curve). Multiplayer is a bit more frantic than singleplayer as you feel pushed harder when expert players are around, but it also allows you to ride the coattails of their tactics and actions.

Despite being a lot of fun, TO THE TOP isn’t the greatest looking VR title out there, but its minimalist style (especially in the earlier levels) does help in making things stand out. No doubt, this also helps in keeping the performance up and making the experience comfortable, which is essential for the high speed experience this can turn into once you start competing for the best times.

TO THE TOP is an excellent addition to the Playstation VR library and can provide the thrills of well-executed parcours runs like few games can. Mirror’s Edge did it in non-VR and Sprint Vector did it in a lap race environment, while TO THE TOP provides yet another new VR approach to the genre. Definitely recommended, especially if you felt Sprint Vector was too much for you with its heavy use of motion controls.