Sandra Bullock’s first major on-screen role in years, Ocean’s Eight revives the franchise that started with Sinatra in 1960 and gained modern day popularity when George Clooney assumed the role of Danny Ocean in a trilogy of films that started forty years later and ended about ten years ago. A lot has changed since then… here’s our review of Ocean’s Eight.

Right away, we learn that Danny Ocean has actually passed away – or at least that’s what’s being assumed by everyone, since you can never be too sure with a conman like Ocean. We learn this through Debbie, Danny’s sister who is about to be paroled after serving a few years in prison. Debbie, portrayed by Sandra Bullock, promises to better her ways – but doesn’t waste any time proving otherwise once she’s released. After a few quick cons to get a free hotel room, some free cosmetics and some free clothes, she quickly hooks up with her partner Lou, a role filled by Cate Blanchett. Bullock remains the main protagonist, with Blanchett a close second and the rest of the crew not joining the action until later.

While Debbie Ocean is perfectly comfortable pulling little cons on her own, her master plan that she’s been brooding on for five years in jail is of a different magnitude. She wants to steal a legendary necklace made by the Cartier company many years ago called the Toussaint – locked in an underground vault for decades now. To get it, she needs to get it onto the neck of a famous actress and then steal it and smuggle it out of the Met Gala. 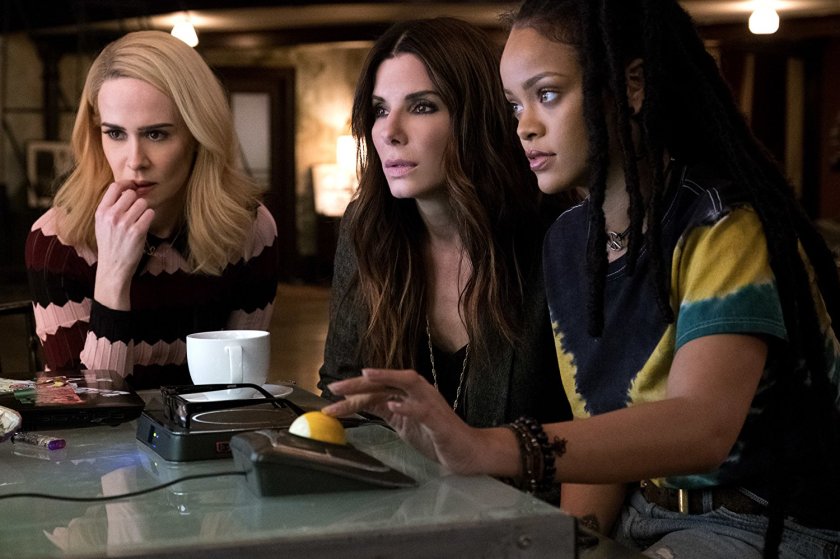 Enter Anne Hathaway as the famous actress Daphne Kluger, Rihanna as a skilled hacker, Helena Bonham Carter as a fashion designer and other several highly skilled women to help set the stage. Anne Hathaway’s (indirectly speaking) the mark, everyone else is on board with the plan. Most of the movie’s 110 minute runtime is then spent with them preparing for various parts of the job and solving minor hiccups along the way.

It’s fairly formulaic in this sense, with few surprises. Debbie Ocean’s heist plan leaves little to the imagination until the last 10 minutes of the movie start, and the acting performances don’t really stand out either. Bonham Carter plays, pretty much, Helena Bonham Carter – the same quirky “oops, what now?!?” portrayal we’ve seen in several of her previous roles. Cate Blanchett is excellent and Sandra Bullock does well in staying away from her previous comedic performances.

Speaking of which, much of the humor in the film falls flat – with the most entertaining bits reserved for the final part of the movie where James Corden enters the scene as an insurance investigator and we get a few surprise twists thrown into the mix. We also find out that, while the heist itself felt fairly straightforward, there were a few secondary objectives in play as well.

Of course, since Ocean’s 13 we’ve had other heist movies, two of them being the Now You See Me films. By comparison, Ocean’s Eight features far less wonder and “oohs” and “aahs”, and I wouldn’t be surprised if the film doesn’t resonate as well with today’s audience as those movies did. They’re also examples of movies where the main characters aren’t shown in a one-dimensional way – which unfortunately is true for most of the cast in Ocean’s Eight. Little time is spent developing characters and having characters bond with one another, and one of them even has a completely bizarre and non-believable reason for joining the band of thieves as well.

As a movie with an all-women main cast I definitely appreciated Debbie Ocean’s exploits a lot more than the recent Ghostbusters reboot though. Unlike that movie, Ocean’s Eight doesn’t lean on the “woman factor” and stays true to the Ocean legacy with a conwoman who doesn’t have to stand on her brother’s shoulders to succeed. I wouldn’t be surprised if he returns from the dead and joins forces with her in a potential sequel though – perhaps even a sequel where two crews face off against each other. We’ll see… I still appreciate a good heist movie, and even though this doesn’t rank among the best of them it doesn’t ruin the Ocean name in any way for me. Bring on the next one!