The eagerly anticipated Firewall Zero Hour by First Contact Entertainment has been launched for Playstation VR – here’s our review.

We’ve had some excellent Playstation VR titles in recent months, but it’s been a while since Sony released a high profile title themselves – the closest we got this year was their excellent (and free) VR update for Wipeout. Firewall Zero Hour also enabled us to dust off our Playstation Aim controller – which we love but is only used in a handful of games, and not all of them were good.

Firewall Zero Hour’s closest non-VR cousin is the Rainbow Six series – Ubisoft’s excellent team-based shooter where one team attacks and another defends (yes, I’m most vividly remembering Siege at this point, not the older games). Firewall is therefore heavily centered on online multiplayer as its core mode, even though it also features single player – but more on that later.

We didn’t get to play Firewall before the launch date, but did hear a lot of positive feedback from gamers at recent trade shows – and many of them had to wait in line for ages to play it. It made sense for Sony to have us wait until the release though, because the game’s multiplayer orientation means you need plenty of players to be online and available for a round at the same time – otherwise it’s a wait game in the lobby, which has been the downfall for many PSVR titles that focus on multiplayer so far.

Things aren’t exclusively online though – there’s a training mode as well, which can be played against bots that charge at you. It’s not super fun and there are better examples of this on Playstation VR, but it’s a decent enough mode for you to get to grips with the controls and weapons. While we did so using an Aim controller, this isn’t mandatory and you can also play with a DualShock gamepad. The Aim controller perfect for this type of game though, which sees you stepping around a corner and quickly taking aim in case an opposing team member emerges – a feeling that’s hard to replicate with a gamepad.

The bulk of the game is its “contract” mode, which is a fairly straightforward 4 versus 4 shooter that quickly becomes tactical in nature, with a big role for communication between team members. When you come under fire, you can let your teammates know where you are and where the enemy is, so they can try to flank them or back you up. You may also encounter a teammate running into a trap, and urge him to retreat.

Oddly enough, communication keeps flowing even when you are taken out during a round (and no one revives you in time). You’ll still hear your teammates (which isn’t too odd), but you can also still converse with them – which is a little bizarre at first. It comes in handy though, since your ethereal self can navigate between various camera angles of the level and give away enemy positions this way. If you’re horrible at first person shooter, then you might still contribute from the afterlife in Firewall Zero Hour. 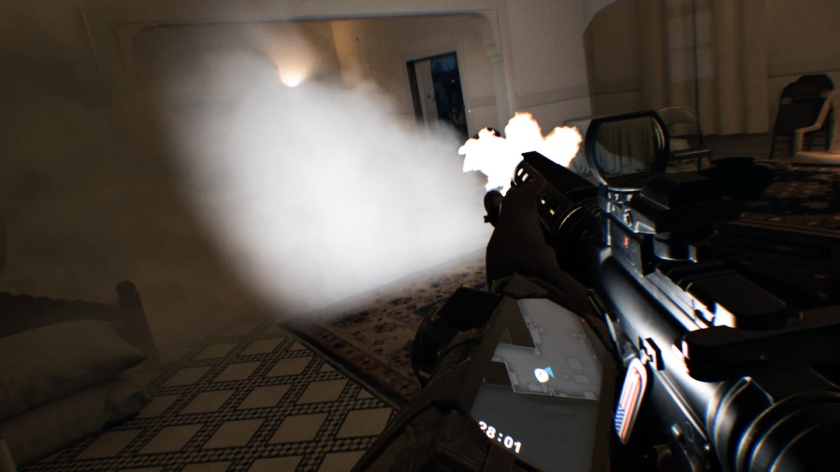 The reason I prefer a shooter like Rainbow Six to Call of Duty when it comes to multiplayer is that the gameplay isn’t all frantic with people jumping and running around everyone. Firewall Zero Hour captures this difference, making for a realistic and immersive experience – and one that’s comfortable in VR. The game also looks good for a Playstation VR title, though it can’t compete with fellow Playstation Aim titles like Doom and Farpoint as far as I’m concerned. It’s still a good looking game though, with great weapon models and excellent animation.

The lack of a meaningful single player mode might still hurt the game in the long run though. Previous VR titles have shown that it’s tough to keep a player base alive and vibrant for any decent length of time. I was already spending more time in the game’s lobby than I wanted to be spending, so I imagine that’ll get worse once the initial enthusiasm dies off a little. The post-release community has been fun to play with though, with the majority of players making a serious effort to play together as a team and figuring out what a smart tactic might be.

I’m also curious to see how the game’s upgrading system will affect the game in the long run, as playing earns you currency that you can spend on new guns and abilities – which I imagine could make things harder on newcomers down the line. If there’s a big enough player base then a good matchmaking system will prevent this from happening, but…. that’s a big if for a multiplayer-only VR title.

Still, even with the “ifs and buts” in place, Firewall Zero Hour is a great tactical shooter in VR, and a must play for those who enjoy similar titles (like Siege) in the non-VR world – especially if you have an Aim controller.