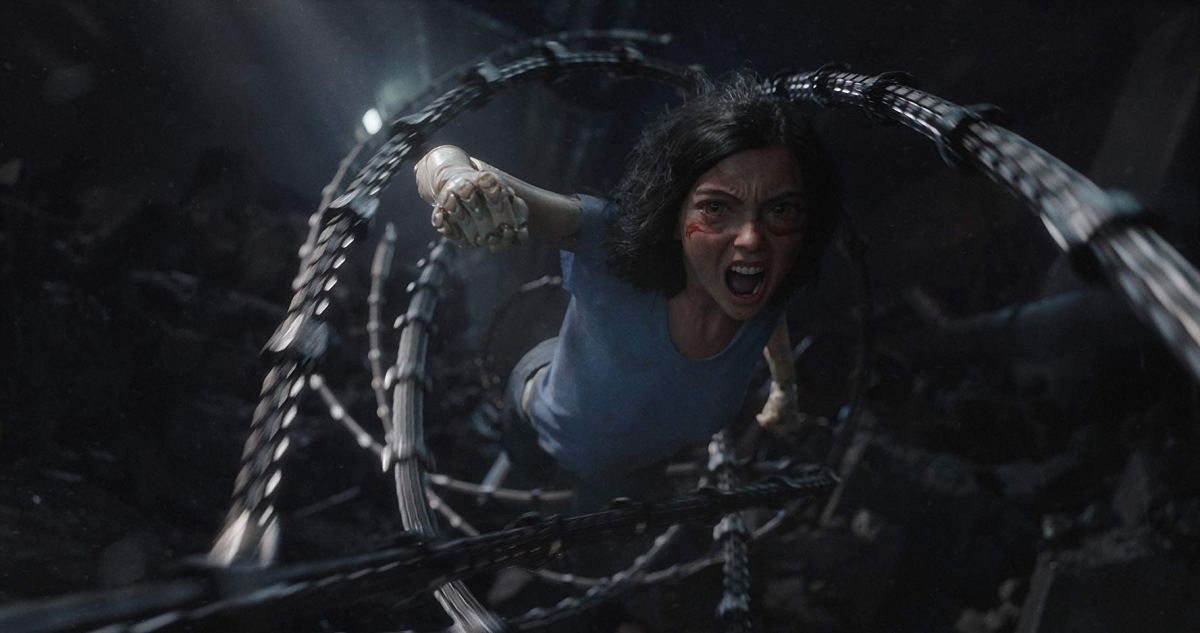 After the sensory experience that was Aquaman, it was time to head back to a 4DX theater near us for another blockbuster – Alita: Battle Angel. How was it, and does it benefit from 4DX technology like Aquaman does? Time for a review.

As with pretty much anything cinematic that James Cameron has done in the past twenty years, the wait for Alita: Battle Angel has been excruciatingly long. After the landmark achievement that was Avatar (which pretty much single-handedly launched the 3D cinema revolution), expectations for Alita were sky high – even if Cameron wasn’t personally directing. From a technical standpoint, Alita: Battle Angel certainly delivers.

Handling directorial duties this time around was Robert Rodriguez, whose past work has demonstrated exactly what we could expect from Alita – a great sense of visual style and lots of over the top action. I was rather looking forward to seeing a visual approach like the one in Sin City be applied to a sci-fi setting.

In Alita: Battle Angel, the world is divided between a post-apocalyptic city and a floating paradise that hovers above it – the city of Zalem, which is never really shown as the movie plays out on land and Zalem only serves as an ideal. It’s where the citizens of Iron City hope to one day travel, even though it always seems slightly out of reach. Taking place in the 26th century, androids and cybernetic enhancements play a large role in both the plot and visual depiction of Alita. Early on in the movie, “cybernetic surgeon” Dr Dyson Ido (played by Christoph Waltz) finds part of an ancient droid in a scrapyard, and puts her back together with a body originally made for his own daughter.

This becomes Alita, who we quickly find is both very curious and astutely aware of danger and her instincts for combat. Remnants of her ancient past, this quickly gets her in trouble, as she finds herself attracting unwanted attention from “the powers that be” up in Zalem who want her captured so they can access her long-lost technology. This is where Nova comes in, the antagonist from Zalem who can see through the eyes of people in Iron City and assume control of them and their speech thanks to the implants they wear. We never see Nova speak (except through his control over other people), but we do recognize Edward Norton playing the part – rocking an odd look somewhat resembling… James Cameron.

Much of the action in Alita: Battle Angel is combat between cybernetically enhanced humans and/or androids, a version of Rollerball (called Motorball), or a mix of the two. The movie’s clearly a case of style and action over substance, as a larger plot is constantly teased but never quite materializes (except for an obvious setup for a sequel as Alita sends Nova a clear message later on in the movie). It’s a bit like having an origin story for a character we’re not yet familiar with – like watching Batman Begins without any Batman knowledge to start with, I’d imagine.

Audiovisually, Alita: Battle Angel is spectacular. The visual effects are stunning, and the interactions between CGI and live action are seamless. Alita herself is a role by Rosa Salazar, but our main protagonist is also depicted only as a CGI character. We’ve been spoiled since the days of Avatar, but I was more impressed with the visual effects in Battle Angel than I was with Aquaman, just to mention a recent example.

Speaking of Aquaman – how does Alita: Battle Angel fare in 4DX? Sadly, the experience was mostly underwhelming. Taking place mostly inside the confines of a crowded city, there are very few scenes where wind and smell effects play a meaningful part. Aquaman also had a ton of “wet” scenes that used 4DX to great effect, but Alita only has one or two instances or that. The most exhilarating scenes come during the Motorball sequences, where you ride along with the action during a few thrilling moments of over the top action.

Does it secure Alita: Battle Angel’s place as a must-see 4DX experience? No, I wouldn’t say that – Aquaman is a much better showcase. But with Alita’s narrative shortcomings (especially if the sequel doesn’t happen), what remains is a visual masterpiece – and that’s still something best enjoyed in a movie theater setting. Just don’t go out of your way to find a 4DX-enabled screen – Alita is just as impressive in regular 3D.