Developed by Bolverk Games and published by Playstack, Dick Wilde 2 is a Playstation VR sequel that caught us by surprise (and which is also out on Rift and Vive headsets). How does it compare to the first one, which we reviewed back in 2017?

Part of the early wave of Playstation VR titles, Dick Wilde was mainly known around the office as “that other game that has support for the Aim controller”. The controller made Farpoint one of the best Playstation VR experiences so far, but unfortunately it didn’t usher in a new era of VR first person shooters.

Dick Wilde took the controller (which is optional – you can work with Move controllers as well) and applied it to a typical shooting gallery/wave shooter formula. In terms of style and approach, it went for a southern US/redneck flair that didn’t take itself too seriously. Not surprisingly, with a title like that. There’s no campaign this time around either, nor does Dick Wilde 2 need one – there’s a thin setup about mutated creatures in the water that need shooting, and that’s really all you need to know.

Besides its use of the Aim controller, I also remember the first game as being just a tad too challenging. I’d complete a few waves, but would always hit a wall after about five waves where the desired score goal was just out of reach for me or I’d lose too much health. As a result, I still haven’t seen the majority of the content that the game has to offer.

Dick Wilde 2 is slightly more forgiving than its predecessor, so if that was a conscious choice by the developer then I suppose it wasn’t just my own lack of skill. Things can become even easier as well, thanks to the inclusion of a two player co-op mode. Basically, if one or monsters end up overwhelming you in the single player mode, the odds are that your buddy will pick them off for you before that happens in co-op – or vice versa. 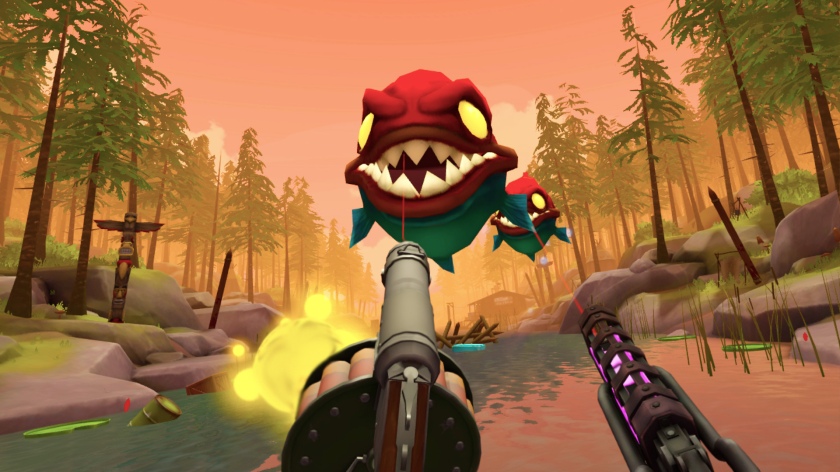 In that sense, Dick Wilde 2 is a more accessible and thus enjoyable version of the first game, even though it does feel like “more of the same” right from the get go. There’s a little more visual detail around as the basic cell-shaded look of the first game makes way for a slightly more ambitious look and feel, although there are much better looking shooters out there.

If you’re interested in Dick Wilde 2, it’s probably for its humorous approach and style – which it applies to otherwise relatively generic gameplay. It’s certainly a more polished and balanced version of the first game, but it won’t sway you if that wasn’t your type of game to begin with. But if you have an Aim controller, then this is a solid little shooter to boot up and play for a bit – especially with a friend.