Dangerous Driving by Three Fields Entertainments takes you back to the last great era of the arcade racer. It’s out for PS4, Xbox One and PC – we took the game out for a spin on a Playstation 4 Pro.

I grew up playing games like Out Run and Super Hang-On, and later on the Lotus series by Magnetic Fields. I even played the non-Sega produced Out Run Europa a ton, and when I finally switched to another generation of gaming hardware I loved games like Screamer, Ridge Racer and Out Run 2006 – one of my favorite Sony PSP games. But then, after the first few Burnout titles on the PS2, the genre kind of went away…

Burnout Paradise was more of an open world approach to racing and, although excellent, lacked that old school arcade appeal. So when Three Fields (with several former Burnout developers) announced Dangerous Driving I was immediately intrigued and couldn’t wait. For the most part, it delivers on its promise – if you interpreted that promise as the option to scratch the Burnout itch for a little while. 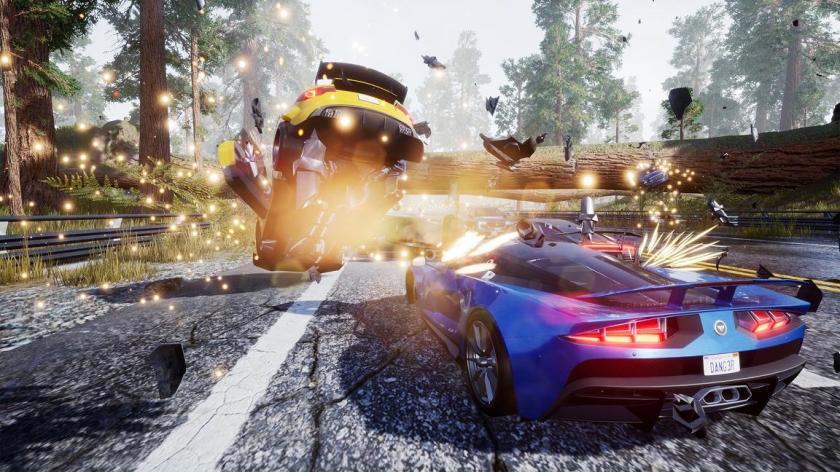 Dangerous Driving has all the high speed driving, dangerous situations and spectacular crashes (in slow motion) that I so fondly remember from Burnout 3 in particular. There are different event types to choose from, although not everything is available on startup and you will need to keep playing to unlock game modes step by step – which can be a bit of a grind when you don’t enjoy all the modes equally well.

There’s a good chance that any given mode will revolve mostly around racing, though nearly all of them have a small or large part of the action reserved for crashing. There’s straight up racing (like one on one racing in Face Off mode), but you can also go for a more Chase H.Q.-type of approach where you play cops and robbers – a genre that Need for Speed made popular once more a while ago.

Crashes briefly switch the camera to a cinematic angle on the action where the crash plays out in slow motion, before returning you to the action. It does break the flow a little bit, but Burnout was never about a constant rush either – it was about incredible surges in adrenaline before giving you a moment to catch your breath gain. Dangerous Driving mimics that sensation very well, although it will be an acquired taste for anyone’s who is jumping into the genre now and missed the original Burnout series.

Driving dangerously, as in Burnout, also rewards you with more boost power – which can in turn cause more mayhem. It’s a shame that multiplayer isn’t included at launch (it’s supposed to be added later), as arcade racing like this is perfectly geared towards it. It’s a shame that many of the reviews at launch won’t reflect a score that takes this into account (and neither does ours), but it’s been a conscious choice to release the game while it’s still being developed. In that same sense, there are a few technical/performance hiccups as well – no doubt those will also receive more attention in the next few weeks and months.

And while on that topic – although Dangerous Driving certainly feels like Burnout it also feels like a smaller studio’s take on the series. Although the arcade gameplay is wonderful, many of the tracks feature backdrops that aren’t exactly inspiring to look at – and we’ve seen much better in the Need for Speed series. Obviously those are massive productions and you can’t expect the same here, but if you were looking for the next evolution of what Burnout did, then this isn’t it. If you think you would enjoy a nice throwback to the kind of fun that those games provided, then Three Fields certainly has you covered with Dangerous Driving.