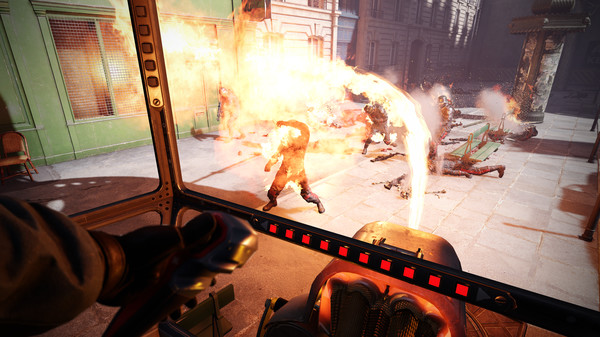 Wolfenstein: Cyberpilot brings the Wolfenstein franchise to virtual reality, with PC-based releases as well as a version for Playstation VR. We tested the latter, which we had been eagerly anticipating. Was it worth the wait?

One of our main reasons for all that anticipation was Bethesda’s track record in VR – they released the incredibly ambitious Skyrim VR as well as Doom VFR, which is probably one of our favorite VR experiences so far. Granted, part of that was the support for the Aim controller, but Bethesda’s releases have also been consistently impressive from a technical point of view. With the recent Wolfenstein titles being gorgeous shooters, it was interesting to see how it would translate to VR.

From a visual perspective, Wolfenstein: Cyberpilot is a very impressive VR title – Bethesda once again doesn’t disappoint in this area. Playing it, you’re instantly reminded that we haven’t seen enough AAA productions for VR in recent month (or at all, come to think of it). The environments are richly detailed, the action is explosive and the backdrop recognizable – if you’re also playing Youngblood, you’ll appreciate the Paris decor to connect this title to the other Wolfenstein production coming out this week.

And while Youngblood is also different from the traditional Wolfenstein experiences, Cyberpilot definitely feels disconnected from the running and gunning experience that BJ Blazkowicz provides. Instead, you’re a hacker who takes over German military tech and controls it to rain down hell upon them – hence the title ‘cyberpilot’. You start off controlling a familiar Panzerhund (robot dog), before venturing on to a drone and giant mech later in the campaign.

Cyberpilot can be controlled using either a pair of Move controllers or a DualShock gamepad – both work very well even though you can semi-freely move your machines around the game’s levels. The benefit of the DualShock approach is that it’s comfortable due to its thumbstick controls, but the Move has a few neat touches in terms of immersion, where you interact with different parts of the cockpit. I feel like this wasn’t explored to its full extent (I would have enjoyed more in-cockpit interactivity), but it’s still fun.

As with other Bethesda titles, there are plenty of customization options to adapt your VR comfort levels to your own liking. Enable smooth turning and Cyberpilot becomes a very cool and immersive experience where it really feels like you’re controlling these giant German war machines. I’ve commented on the movement, but the emphasis is definitely on firepower in this game – and there’s plenty of it. While the controls stay similar, your range of weapons also changes when you “board” a different machine – mixing up the action as you progress.

The fun doesn’t last long enough though – Cyberpilot’s campaign is relatively short and leaves you wanting more the second it’s over. Obviously that’s a sign of any good game, but in this case there’s also a nagging feeling that tells you “this was just getting really good – where’s the rest?” With only four levels to play though, you’re basically looking at one level per ‘machine’ and a final level in which you can freely switch between all three – a bit like playing through a lengthy tutorial and then seeing the credits roll when you think you’re getting started.

Still, we shouldn’t complain too much – Wolfenstein: Cyberpilot is very competitively priced in the VR market and has production values that few can even come close to, especially in this price range. It may not feel like a Wolfenstein title as much as Doom VFR felt like Doom, but it’s still a VR shooter worth playing.