Remnant: From the Ashes could be one of this summer’s surprise hits. It’s out now, with Gunfire Games (of Darksiders III fame) producing and Perfect World Entertainment publishing. It’s available on PC, Xbox and PS4, all launching simultaneously.

Booting up Remnant took me back in time to almost a year ago to the day, when I hadn’t heard about the game yet and walked into day one of Gamescom 2018. In a hall with Microsoft’s Xbox booth, THQ Nordic’s booth and the Wargaming booth, the middle of the hall was reserved for something called Remnant: From the Ashes. It was by Perfect World Entertainment so I assumed it was going to be another MMO-type title, but the artwork on the outside of the booth suggested otherwise. Twenty minutes later, I was glad I stepped in – and that feeling persisted as I played the final game, a year later.

The main reason I didn’t play that Gamescom demo of Remnant for more than twenty minutes isn’t that I grew tired of it or hit the end of the demo – it was that I had hit a wall and died. This is a challenging game, and the many comparisons to Dark Souls within the gaming community aren’t a coincidence. I feel like they mostly refer to the punishingly high difficulty level, boss fights and overall dark/bleak visuals though, as Remnant is definitely a title that can stand on its own two legs as something unique.

A post-apocalyptic rpg/shooter with heavy loot/survival elements, the game is surprisingly low on narrative direction unless you’re looking for it. Rather than rely on scripted cutscenes, a lot of the (back)story is fleshed out through the conversations you have and items you find. It’s certainly not something that’s uncommon (especially in the AA tier), but a bit more story direction could have helped to add even more shine to an already very good title. As it stands, all you need to know is that mankind has almost fallen to an otherworldly evil called the Root, and you need to scavenge your way through what’s left as you try to survive and fight back.

Part of the reason that Remnant’s game world doesn’t lend itself to strict direction is that it’s (at least in part) randomly designed every time you play. Enemy and item locations change as well, and if you’re unlucky this can also seriously affect how big your challenge is going to be in a certain playthrough. What helps is that you sometimes pair up with other survivors, and you can even play the game through online co-op with a friend (or a stranger, through matchmaking). Do this with someone you communicate well with, and Remnant gets another layer as you can employ the kind of co-op tactics you normally expect in something like The Division. If the single player campaign didn’t do it for you, then online co-op definitely cements Remnant’s identity as something different from Dark Souls. 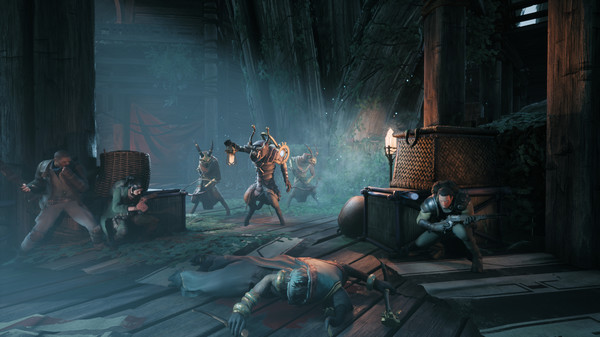 Where many games with randomly generated environments resort to a fairly basic look and feel, Remnant: From the Ashes looks like a stunning post-apocalyptic environment where set pieces (like the boss fights and certain locations) are all stitched together for a coherent whole to serve as your own personal game map. And if you don’t like it, or the challenge it presents, you can even reset it to try again with different parameters. It may lack the visual polish of the aforementioned The Division, but Remnant looks good and performs even better – stable framerates, no visual glitches, and smooth gunplay help make it a joy to play.

Speaking of combat – most enemies can be taken down with a single (well-placed) shot, but others will take longer to kill. Since ammo isn’t plentiful, there are times where stealth is your friend as you conserve ammo by avoiding a handful of enemies rather than taking them on as you push on towards the next in-game checkpoint. These are often safe havens where you can stock up on supplies ahead of the next challenges that await. This is where the loot-driven dynamics are evident, and it becomes clear the Remnant is a very well-balanced game that walks a fine line between being incredibly hard and frustrating.

My only real gripe with Remnant: From the Ashes is that I would have enjoyed more of a narrative/story focus inside the intriguing world that the game presents, but I was having too much fun to focus on that too much. Still, hopefully we’ll see more Remnant in DLC content of a sequel – this could be a promising franchise for Perfect World.