Karaoke fans can rejoice, because a new edition in the Let’s Sing franchise from Ravenscourt and Voxler has been released. Let’s Sing 2020 is out for Nintendo Switch and Playstation 4, and we used the latter for this review.

When you think karaoke on Playstation, Singstar quickly comes to mind. But where Sony’s franchise has gradually transformed to an online service, the Let’s Sing franchise still comes out with an annual release. We prefer it that way, since we’re not die hard singers but love diving into a new tracklist for a few evenings of good fun every now and then.

Of course, there’s a brand new tracklist in Let’s Sing 2020 as well, and just as last year there’s a great blend of present day favorites and older classics. Hit songs from the past few years include Calvin Harris & Dua Lipa’s “One Kiss”, OneRepublic’s “Counting Stars” and George Ezra’s massive hit “Shotgun”. The number of songs from the eighties and nineties is much smaller, but Queen’s “The Show Must Go On” and Bon Jovi’s “You Give Love a Bad Name” provide classics to the mix with Robbie Williams’ “Angels” and “Wannabe” by the Spice Girls adding two nineties favorites to the tracklist. 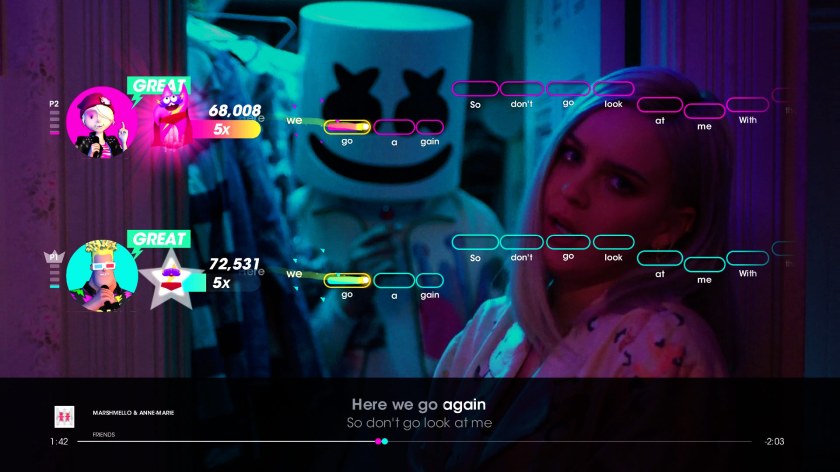 It’s a great blend of current songs and older classics (though I always think a 50-50 divide would be better to draw in the crowd that’s not into today’s hit music) and there’s a good mix of slower and up-tempo songs as well. With thirty (original) songs to choose from, it’ll be hard for players not to find at least a handful of songs they enjoy – and with a group of people that’s more than enough to fill a night full of music. There are a few DLC packs with more songs available as well, but be aware that there’s overlap with DLC for previous editions of Let’s Sing.

As mentioned, all the songs are the original versions and they can be played solo or with a friend. You can use a dedicated smartphone app to sing along, but it’s more fun to play with actual microphones – we used old (PS2-era) wired Singstar mics, but we’re fairly sure any PS4-compatible mic will work with the game. 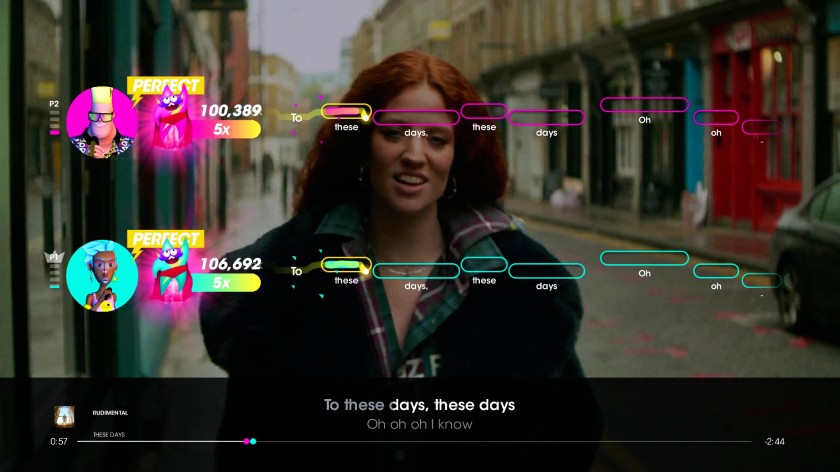 In addition to the modes that Let’s Sing already had (including mix tape), the new 2020 version introduces a brand new party mode. This bumps the maximum number of players from four to eight, with players being divided into two teams and the game presenting you with a random mix of game modes for the teams to tackle. You only need one microphone per team that you share, so it’s a fairly casual way of sharing in the fun and drawing in those who would otherwise sit back and claim to not have room on their smartphones for an app.

With Singstar kind of fading away to all but the die-hard crowd of players, it’s nice to see the Let’s Sing series deliver with another strong tracklist and even a new gameplay mode. I wish it was easier to carry over previously bought content to the new version to make the upgrade smoother, but I’ll assume that’s more of a PSN thing. If you have a party or social gathering with music lovers coming up, then Let’s Sing 2020 can help liven up the evening.