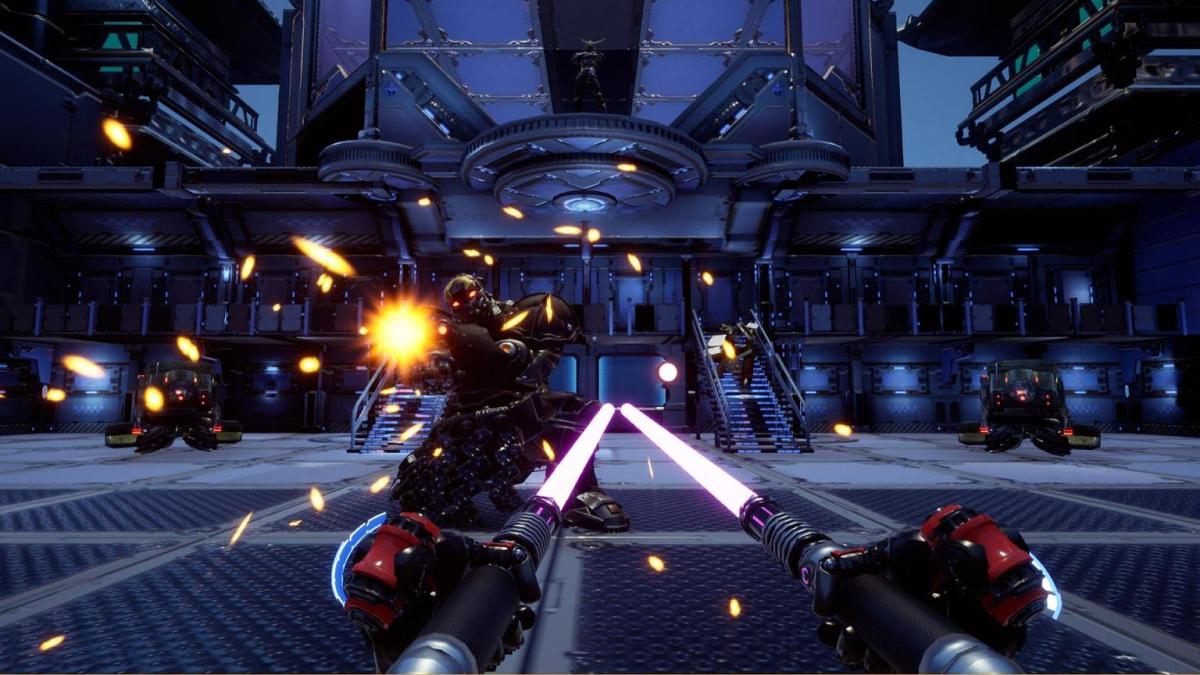 Announced back in 2017, Reborn: A Samurai Awakens was suddenly and surprisingly released last week after it had gotten quiet surrounding the game. We donned our PSVR headset and checked it out.

On paper, Reborn: A Samurai Awakens sounds great as a retro-futuristic VR action game that turns you into a samurai who also gets to wield guns. On top of that, you have the ability to wield lightsabers AND use a power called “the force” to pull in and throw around enemies. Darth Vader meets robo samurai. In its current state, however, that is way too good to be true for Reborn.

Reborn: A Samurai Awakens is controlled using a pair of Move controllers and gets around the lack of proper movement controls on them by being a game that is essentially on rails except for the parts where you engage in combat. As you move from point to point you can hold down a button to move forward (through very slowly) with a small degree of head control giving you the illusion of free movement. Once you hit the next area to fight in, control switches to wielding your selection of guns and lightsabers – and this cycle repeats throughout the duration of the game.

Games that are on rails can work great in VR, as Rush of Blood demonstrated early in the PSVR’s lifecycle, and we’ve seen something more similar to Reborn when we played Mortal Blitz. Both are far superior to Reborn: A Samurai Awakens though, and a lot of it is in the execution. Not even going into gameplay just yet, this is a technically flawed game with poor framerates and ditto animation despite visuals that are a lot less impressive than those 2016 and 2017 titles.

Some of that is down to a rather bland and blurry visual style and a severe lack in enemy diversity, but some of it’s definitely due to the many glitches that are present in the game. Enemies can get stuck in an indefinite stutter mid-animation, which looks silly, ruins the immersion and shouldn’t have gotten past the bug testing phase. In many cases, the only way to “fix” these bugs is to just restart the level you’re on and hope for the best.

Gameplay, when it works, feel uninspired as well – though it’s hard to look past all the technical issues the game has. Gunplay is actually fairly decent and works as expected, but using your lightsabers is an experience that’s about as far from “Star Wars” as it gets. Instead of a graceful sword battle, expect to just frantically shake your move controller in front of you for the best effect – it’s like one of those Wii games where it doesn’t really matter how you move, as long as you move. This also works for your ability to deflect incoming bullets, and the only exceptions are the QTEs where you have to hold your Move controller in a certain position rather than move it around.

Because of these issues, there is little satisfaction in completing Reborn: A Samurai Awakens’ levels. You’re just happy you got through without too many game-breaking glitches, or sad it didn’t feel like the result of much skill on your part. It’s sad that the game doesn’t live up to its promise and feels like an early demo rather than a finished game, but after three years of PSVR there are far better options out there.