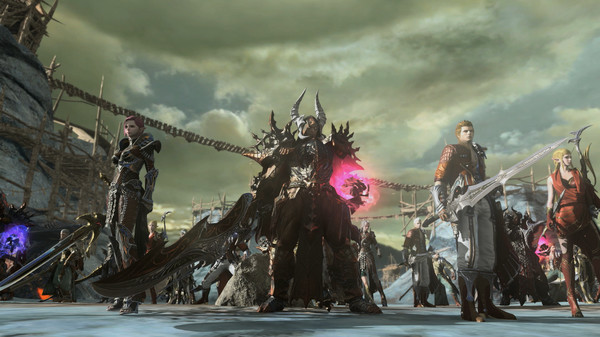 After last month’s preview event, we’ve finally been able to spend more time with Blueside’s Kingdom Under Fire II. Gameforge is publishing the EU and US launch of the game, which is available now either through the game’s own website or Steam.

In our preview of the game, we already discussed the new direction that Blueside has taken with Kingdom Under Fire II, combining its classic blend of RPG and strategy with the MMO genre. We went hands on with the game last month, but hadn’t had a chance to try out the strategy portion yet – which arguably feels like it’s the best part of the game now that we’ve played its campaign.

There’s a bit of a slow trek through mostly formulaic RPG/MMO fare before you get there though, and in terms of pacing and writing this portion certainly leaves something to be desired. There are some excellent cinematics to help set the scene for a tale of grand fantasy, dragons and intrigue in the land of Bersia, but once your feet hit the ground things feel a lot less epic than the videos suggest.

A lot of the early phases in the game are spent walking from one NPC to the next, as a part of the quests that help push the narrative forward. The main problem with this is that neither the characters nor the quests are very interesting. Most characters just stand there, being somewhat awkwardly animated, and have little to say. There’s the usual pleasantries (or a “leave me alone, I am busy” reply), followed by whatever the active quest assignment for you is. Sometimes the transition between these two is very abrupt or even blunt, revealing that the writing isn’t up to the quality of other fantasy RPGs and MMOs like Elder Scrolls Online or The Witcher 3.

The actual quests you receive are also often situated somewhere in between boring and frustrating, often being a case of “go talk to this other guy now” or “go get/do this for me”, quests that are either standard fetch quests or (at best) a case of having to get rid of a few small monsters that are nearby. When you hit a sequence where you’re being taught a new game mechanic you feel like you’re finally making progress again, but in a story-driven fantasy RPG the actually narrative should be much more of a driving force and should not feel like a massive grind.

As a result, the narrative and lore isn’t what’s going to grab you here – even though there’s plenty of lore built up from the franchise’s almost twenty year history. The set pieces that often go with these new gameplay dynamics/tutorials are far more interesting than the simple and almost archaic MMO quests that you are spoon-fed in between, as they are hints of where the most interesting parts of Kingdom Under Fire II lie. Early scenes can involve you defending a town against an invasion, or being on the offensive – and these scenarios offer a sense of the scale that the later (more strategy-oriented) portions of the campaign offer.

It takes about two hours before the game lets you engage in its unique combination of RPG combat and real time strategy, although ‘real time tactical combat’ is perhaps a better description. When you start a battle it’s usually from your default MMORPG view, and the action looks not too unlike a musou/Dynasty Warriors game in which unleashing the right combos and using the right ultra attacks is a large part of the game.

You can, also zoom out (seamlessly) and take control of your pre-selected squads and command them during combat. You’re never commanding more than three squads at once, but battles still have a good sense of scale because you can assign multiple units and you can bring in reinforcements should you need to. This is where Kingdom Under Fire II shines most brightly, since you can get your affairs in order on a tactical level and then dive right back into the action to get a sense of the carnage and scale of it all – especially when you’re facing some of the larger monsters in the game.

Although you shouldn’t compare a game like this to Total War, both games have an impressive amount of unit types that feels impactful in battle. Selecting whether to take ranged units, foot soldiers, wizards or giant fantasy creatures into battle is a strategic choice, and how you use them in combat is a tactical matter. The fact that Blueside has crafted a combat experience that smoothly transitions even to the most action-oriented level on the battlefield is certainly commendable, and the top reason for playing Kingdom Under Fire II.

There are a few reasons why I can’t flat out recommend the game though. If you’re an MMO player or even veteran, you’ll likely have played much better examples already – and the same is true for fans of narrative-driven RPGs. On top of that, even though this game went through a development cycle spanning more than ten years, it still feels like it needs work. I’m not just referring to visuals that can feel a tad dated – that’s to be expected with a game that’s been in development this long. I’m referring to the fact that, even post-release, I was still greeted with Korean dialogue and UI elements, as well as shoddy translations or subtitles that didn’t match up with the voiceovers.

The trek to Bersia is worth it for the unique blend of strategic, tactical and action-oriented combat, but MMO or RPG purists should look elsewhere. I’d love to see Gameforge take a chance on the franchise and produce a new game without the MMORPG elements that currently drag it down, but let’s see what they have in store for us post-release first.