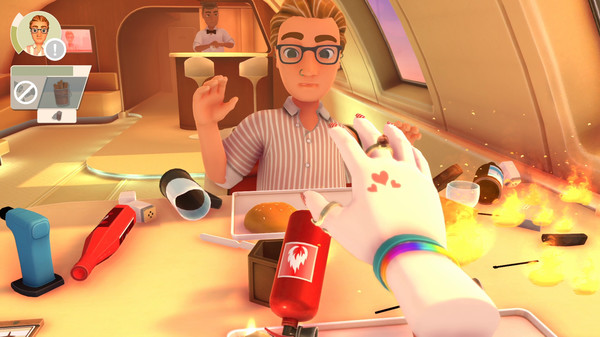 This Valentine’s Day, there’s a new kind of ‘romance game’ on the block. It’s Table Manners, and it’s out now on Steam.

Developed by Echo Chamber Games and published by Curve Digital, Table Manners is one of those romantically-inspired games – but not one of those Otome visual novels you might associate with that particular sub-genre. Instead, Table Manners puts humor and hands-on gameplay first.

Before you let your imagination run wild with that last part – the bulk of Table Manners is you going on a series of dates and causing all kind of mayhem at the dinner table in various restaurants. Being a physics-based game in which you only control your hand, things quickly go wrong, often to hilarious effect. Getting dates is handled through a Tinder-like application, which unlocks new dates – each one bringing new challenges and venues with it.

The game is controlled with a combination of mouse and keyboard, and it’s a shame that motion controls aren’t supported since the game would be perfect for it. I’ve heard rumblings that people were hoping this would have VR support as well, and although I can see the appeal this is definitely a game that’s easily enjoyed in a social setting with others – perhaps with a significant other this Valentine’s Day? In that scenario, tucking yourself away inside a VR helmet isn’t the most romantic option. Check out the Steam page for more on the game!