One Piece Pirate Warriors 4 from Bandai Namco is out, and we’re reviewing it on an Xbox One. It’s also available for PS4, PC and Nintendo Switch.

It’s been a while since One Piece Pirate Warriors 3 came out, so I was surprised when Bandai Namco and Koei Tecmo announced that a sequel was in the works. To put that into perspective – I played the previous game on the Vita back in 2015 and even then it was one of the last releases by a major studio for the platform.

Luckily, it’s been worth the wait and it’s even a good starting point if you didn’t get into the source material until after the previous game was released. One Piece Pirate Warriors 4, much like the recent Dragon Ball Z Kararot release, covers much of the original One Piece narrative and does a good job of (re)introducing its colorful cast of characters. The gameplay itself is still mostly a variation on Koei’s various Warriors franchises, although definitely not a carbon copy. 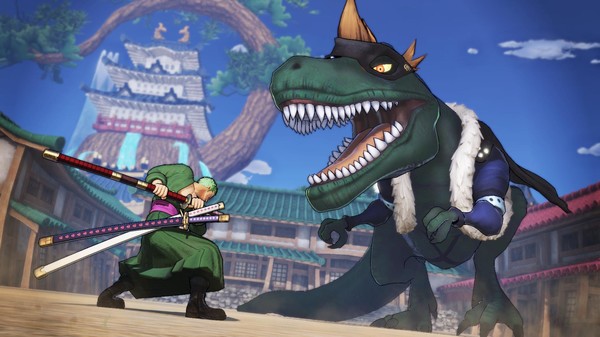 While playing, you gradually unlock special attacks that you can unleash during battle. You’ll have quite a few of them after a while, but you can only take four of them into battle with you. Launching them is done using the familiar system of holding down the shoulder button as a modifier and then pressing the corresponding face button – a system we’ve seen before in similar fighters.

Pirate Warriors 4’s story mode features a number of different storylines, all padded with different missions and characters that you unlock as you complete objectives. Doing so earns you the ability to upgrade characters with new abilities and attacks, and with a lot to unlock there is plenty of incentive to keep going. You can replay older missions with newly unlocked characters, or keep replaying missions with familiar ones in order to level them up.

Combat’s surprisingly deep because of the aforementioned selection of special attacks than can be customized for each battle. You can also smoothly transition between ground-based and aerial combat while in game, making for a nice anime ballet of pummeling rather than brainless button mashing. This is especially true for the game’s boss fights, where a big chunk of the fight consists of wearing down their armor before you can even think about hurting them. The bigger the enemy, the harder it’s going to be to stay out of harm’s way while doing so as well.

It’s these bigger bosses where you can see the progress that was made in the series as well, with Pirate Warriors 3 still running on an older engine and the new game feeling much closer in look and feel to the recent Kakarot release. Some of the old camera woes that come with this type of game still remain and not all the visual effects are as polished as they could have been, but overall this is a nice looking One Piece title that looks close enough to the source material to be convincing.

Online cooperative play is supported as well, and handled nicely. Rather than forcing you to play through an entire campaign together, it’s pretty much drop-in, drop-out where you can just have someone join you for a single mission or you can jump into someone else’s campaign. The difficulty level doesn’t scale accordingly, so things get easier when you add fellow players into the mix.

One Piece Pirate Warriors 4 doesn’t reinvent the franchise nor does it bring a lot of hyperfresh content to the table. It is, however, well stocked with content, has a solid fighting system, a fun roster of characters and ditto narrative and it looks the part. Much like Kakarot it feels like “best of” edition, but since it’s been almost five years we’ll forgive them for that.