Ghost of Tsushima was developed by Sucker Punch, and for those not familiar with developer names it’s the studio behind two highly successful PlayStation franchises: Sly Cooper and Infamous. Considering the fact that Infamous: First Light was released on the PlayStation 4 way back in 2014, it’s been a bit of a wait for a game that – at least on the surface – looked like a cross between Red Dead Redemption 2 and Nioh.

The game features a fictional storyline set against the very real history of 13th century Japan and the invasion attempts by the Mongol empire. Having wiped out nearly all of the samurai on the island of Tsushima (situated about halfway between Korea and Japan), you play the role of protagonist Jin Sakai. One of the surviving samurai, you need to reinvent yourself if you are to break the forces of the Mongol army on the island. They’re personified by the vicious general Khotun Khan, and if you’re to get close you need to learn the ways of the “ghost”. This means striking from the shadows and instilling fear into the minds of the surviving Mongols, turning you into what they’ll see as the Ghost of Tsushima.

Sucker Punch’s game world is an open world environment based on a real life location, and traversing it is realistically done since your best way of getting from A to B quickly is by mounting a horse and riding there. This is also a great way of highlighting how wonderfully detailed and diverse the world that the developer has created looks, with surroundings that organically shift from grassy fields to woodlands and from towns to mountainsides.

Taking on the optional side quests that the game’s NPCs offer you is a great way to explore as much of the island as possible, while also lengthening your gameplay experience significantly. I strongly recommend taking on these side quests not just for that reason though – they expand on the lore and they’re also expertly crafted even though their objectives aren’t always original and repeat themselves. 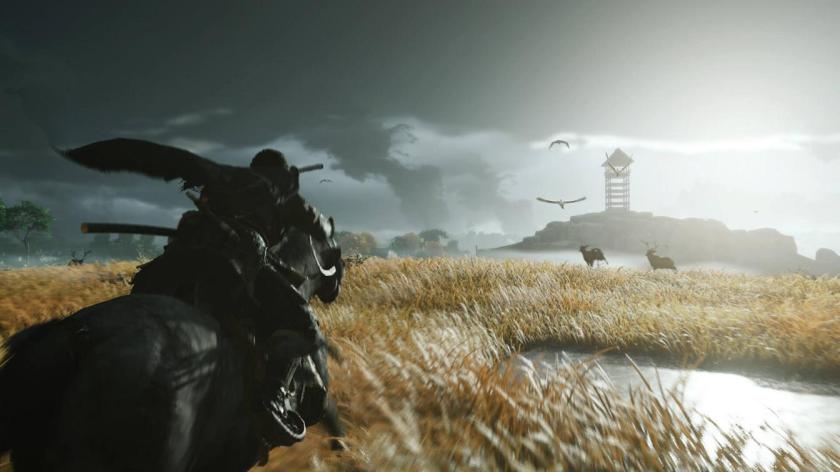 Ghost of Tsushima differentiates itself from other open world action adventures by providing a more organic process of discovery and traversal. Rather than rely on an on-screen map that has you chasing colored dots instead of watching the screen, the display is very clear and keeps you focused on the action. Still need a bit of guidance to get where you need to go? There’s an innovative wind system, where swiping the DualShock’s touchpad generates gusts of wind that help guide you towards where you need to go.

Merchants give you the chance to increase your stats, while finding hot springs allows you to relax and increase your health. Finding resources is another way to explore your beautiful surroundings, and you’ll spend hours doing so without ever feeling bored. A large part of that is undoubtedly how gorgeous the game world in Ghost of Tsushima is, an experience that ranks right up there with some of the most gorgeous games that this generation has to offer. Much of the scenery is just untamed nature, and it’s all rendered in gorgeous colors and immaculate details.

That sense of visual style also carries over to the combat, which there is a lot of and relies on the use of Jin’s katana and expert timing rather than button-mashing. Strike at the right time, and you might parry that incoming attack. Ignore that feint, and quickly strike afterwards to deal a fatal blow to your enemy. You also have a variety of stances to help alternate between fighting styles – each one with its own unique strengths that fit certain enemy types better than others.

Upgrading Jin also means getting access to new combat abilities, many of which belong to the “ghost” abilities that you’re initially reluctant to develop because they go against your samurai code of honor. They make for new and diverse ways to strike against the enemy though, making use of ranged weapons like throwing daggers and smoke bombs. Because of your ever-expanding set of skills, you always have more than one option to approach an enemy location. This encourages replaying the campaign, although the somewhat repetitive nature of the objectives (once you approach the 20 hour mark) didn’t make me feel like jumping right back in even though I had had a blast playing.

Ghost of Tsushima isn’t perfect, but it’s a bold new change for open world games that ultimately pays off. The Last of Us Part II was always going to be a tough act to follow in terms of big exclusives, but Sucker Punch has succeeded in creating something that’s both gorgeous to look at and memorable to play. The game could have used some more quest diversity, but it’s a must-play title for the PlayStation 4 this summer nonetheless.