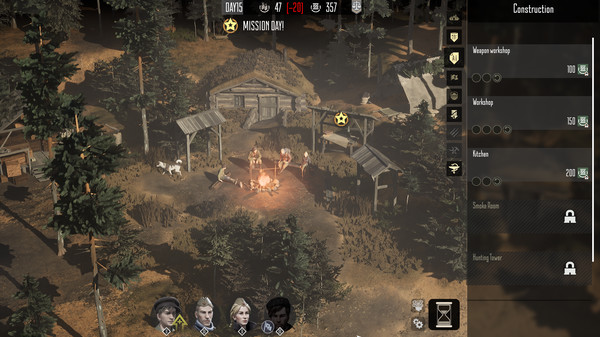 From developer Alter Games and publisher Daedalic comes Partisans 1941, another stab at the real-time tactics genre that’s been having a bit of a revival recently. It’s out now on PC – how does it compare to the excellent Desperados III?

You could say that 2020 is bringing back the real-time tactics genre in a big way, because in addition to Desperados III we also saw a remake of Commandos 2 appear – games that all share similar gameplay mechanics despite their different approaches to the genre. Partisans 1941 is no exception, with a new take on the World War 2 era that also brings a few new gameplay elements with it.

Central to the experience are the lives of the Partisans – a group of resistance fighters led by protagonist Commander Zorin, who escapes from a prison camp to gather a group of brave resistance fighters on the Eastern Front. Hiding in a camp in the forest, you only venture out to strike the enemy where it hurts – but in the forest you also find the biggest innovation to the genre.

While the missions bear more than a striking resemblance to Commandos and Desperados in terms of their mechanics, the time spent in your camp shows you another side of what the Partisans went through. You’ll have to run things there as well, upgrading the camp with new buildings, which in turn allows you to turn loot from missions into new equipment that you can take with you. You can also send some of your men off to gather resources and food for the camp, which certainly helps in making your group of Partisans feel more like real people rather than just characters you take into missions.

Those missions themselves will feel familiar to fans of other games in the real time tactics genre, with different characters having different abilities for you to use. Stealth is always a good option, but is less dominant than it is in Desperados or Commandos – with confrontation and firefights often being something that’s hard to escape. Perhaps it’s a good fit with how conflicts played out in real life, but Partisans 1941 is a game where combat feels like it’s more prominent than in other titles. You still have plenty of avenues of approach to take, so in that sense the developers at Alter Games definitely took inspiration from Mimimi’s recent games, which are less linear than the old Commandos games.

You’ll quickly see familiar mechanics like the ability to see an enemy’s line of sight using a view cone, and you’ll also be able to take out enemies with throwing knives or trick them using a disguise. Characters have their own specialties as well, which means one might be better with long range weapons while another can heal a friend in a time of need. But while characters have a variety of mechanics you can play around with, they’re not as finely crafted in the narrative sense – with the exception of our protagonist many of the characters feel like NPCs in a way.

You could call some of these characters “functional”, which also applies to the audiovisual presentation of the game. The game portrays a bleak vision of war that’s probably accurate, and the lack of color and detail doesn’t make the game world and its inhabitants come alive. So-so voice acting also doesn’t help in that regard, as our Partisans all sound like Brits even though the game takes place on the Eastern Front. All of the antagonists have fitting accents, so it’s a bit strange when your own crew feels slightly out of place.

Having said that, fans of real time tactics games will certainly enjoy Partisans 1941. The base building aspects provide a fresh perspective, and the fact that a mission can quickly turn sour when you’re lured into an armed confrontation is exciting and makes you wonder if another approach would have made things turn out differently. And that’s what made Desperados III so much fun, right?