Iceberg Interactive’s Transient, developed by Stormling Studios, is out now on PC – with console versions coming in 2021. Here’s our take on this blend of cyberpunk and horror.

We actually first laid eyes on Transient in the summer of last year. It was a very early build of the game, but we immediately loved the atmosphere, with Giger-like visuals and lighting effects as we saw ourselves move through a creepy hallway. It wasn’t much to go on in terms of gameplay, but we were certainly intrigued and jumped on the game as soon as review code was available for it.

In Transient, you’re a hacker called Randolph Carter, and although you can’t remember the details something went wrong during your last mission – breaking into the Khepra Corporation. Now, your dreams are being haunted, your fellow hackers are letting you know things aren’t right, and you keep hearing voices. Is it just because you have implanted yourself with various enhancement, or is something more sinister at work here?

As with their previous game Conarium, Transient was inspired by the works of H.P. Lovecraft, in which identity loss, darkness and despair often feature prominently. The cyberpunk setting is a new take on the genre though, which often picks fantasy/horror-style backdrops for its videogame environments, often taking place in the Victorian age. A result of that is that Randolph doesn’t venture out much, but instead ‘hacks into’ different minds and environments over the course of five chapters. It’s an approach that allows the developers to showcase vastly different environments, rather than one continuous game world – especially because you often delve into someone’s subconscious reality.

This approach makes for some very diverse environments, and all of them are beautifully detailed and works of art in the their own right. Despite the often dreary and dark locales, this also meant that the experience stayed fresh, and I never knew what was going to be next. Even though the actual gameplay usually just consisted of exploring a location fully in order to unlock the next one, I found myself genuinely interested in the new locations and it never felt like I was just going through the motions to get further ahead.

The H.P. Lovecraft angle is another area where Transient was a pleasant surprise. It’s something that’s been done a lot in videogames, to this point where you start thinking you’ve heard it all before, but Stormling’s blend of Lovecraft and cybertech and A.I. didn’t give me that feeling at all. There are plenty of subtle nods to the author’s works in the game, from familiar characters to names that definitely ring a bell, but it never gets in the way of the gameplay and it’s something you can enjoy even without a firm interest in the works that inspired the game. 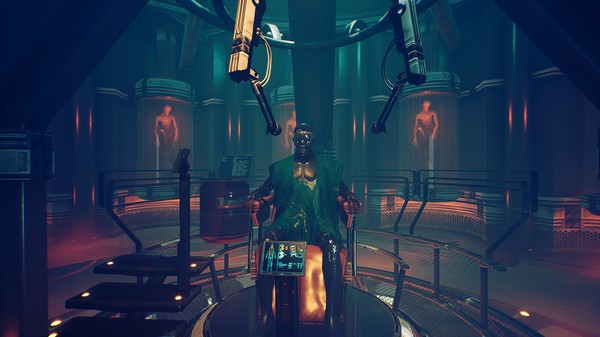 Besides exploring, you’ll also find yourself having to overcome puzzles, which of course appear in the game as hacking challenges. Very often these are logic puzzles, sometimes mixed with stealth elements. While these often provide a nice change of pace from the tense and dreary atmosphere of the game, there are a few instances where these challenges simply take too long, even when done well. In those cases, they’re not just quick breathers, but they took me out of the carefully built tension and momentum of the game altogether.

The narrative suffers a bit as a result, and although a slow buildup and dread about the unknown are common themes in Lovecraft’s works it would have helped if the player was on a clearer course to an ending – which ends up not delivering the payoff you were maybe looking for. Obviously I’m keeping this vague so as to not spoil anything, but you’ll see what I mean.

Transient is still an improvement over Conarium though, as I absolutely loved the visuals and atmosphere and was always eager to continue. Another solid choice for a Halloween-themed experience this season.