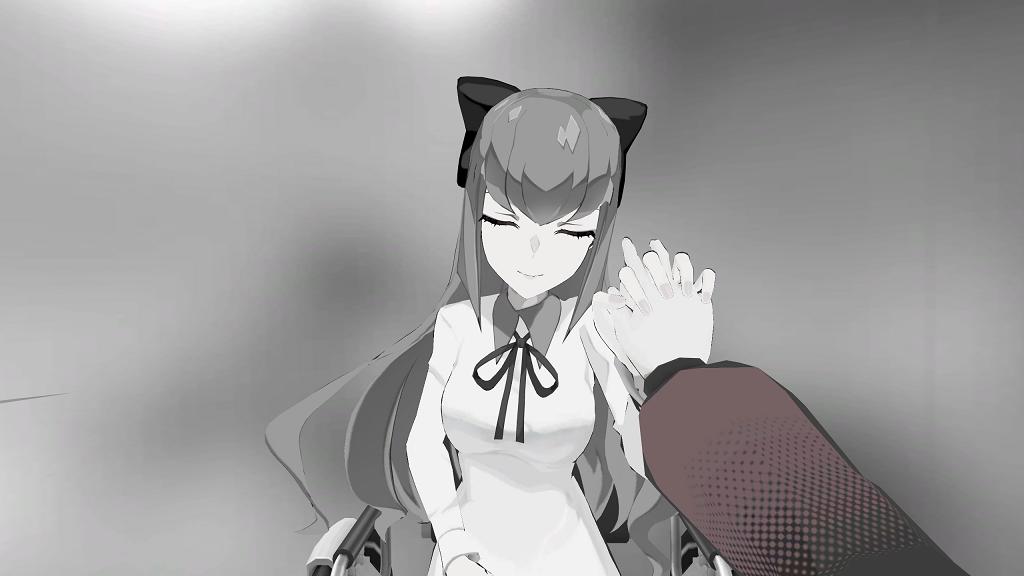 Bearing no relation or resemblance to another game with “Chronos” in its title that was released this week, ALTDEUS: Beyond Chronos is a VR take on the visual novel genre that feels like a genuine evolution of the format. It’s out now, and we tested it on an Oculus Quest 2 headset.

Developed by MyDearest, ALTDEUS: Beyond Chronos is the story of Chloe, engineered to be a soldier for the Prometheus organization that fights against the invading Meteoras forces – vicious creatures who will not hesitate to kill the innocent living in the city of Makhia. One of their victims was a young girl named Coco, who Chloe was tasked with defending – which instilled a raging sense of hatred for the Meteoras in our protagonist.

Her employers looks at them in a different light, because although their primary directive is to hold them back and ultimately defeat them, they also wouldn’t mind sparing some of them so they can be studied to help them develop more effective weapons and modifications in the future. It’s a tale that’s right at home in the popular cyberpunk genre, and the visual style reflects this.

Chloe’s drives and motivations are revealed through flashbacks, but as you travel forward through the story you also have the opportunity to shape her destiny through the choices that you make. While this is a default mechanic in nearly every visual novel game out there, here it’s been seamlessly interwoven into the narrative. Humans can be implanted with an AR-like software system called Libra, which kicks in when important choices have to be made. Although ultimately it’s the same thing as getting a box of text with choices, it feels much more organic to make choices this way, whereas the old approach always feels like it puts the game on pause and takes you out of the narrative for a little bit.

ALTDEUS: Beyond Chronos features a branching narrative, allowing you to explore not only the games different endings but also a variety of ways in which you can shape Chloe’s personalities and her relationships with those around her. Although the scale of the story is large, the narrative focuses on just a small group of characters, keeping things from being too overwhelming as you get to grips with the grand war that is raging and everyone’s role in it through personal stories and perspectives. Exploring diverse themes that include interpersonal relationships and corporate dynamics makes sure that individual story beats don’t drag on for too long, which is important because pacing and length can be an issue in a visual novel.

Experiencing the story in ALTDEUS through VR helps make the relationships with people feel more immersive, as you can look them in the eye and hear their words through an excellent English or Japanese dub. Characters have also been animated well, which is a huge improvement over the static images you’ll usually find in a visual novel. Further immersion comes from a few (rather shallow) motion controlled elements where you manipulate things in the environment – the most prominent example of which is the ability to exert a degree of control of the mechs that are used to fight the invading forces.

In terms of modern day conveniences in visual novels, ALTDEUS also features the ability to explore different story paths using a branching tree that displays the timeline and choices you’ve made, adding to the game’s replay value because it doesn’t require you to play through the entire thing from the beginning just to see what “option B would have done”.

This is a great example of how the visual novel genre can translate to a VR environment, and hopefully we’ll see more games like this come out in the future. It’s visually impressive on the Quest 2 as well, and recommended for anyone who’s been fond of visual novels in the past and wants to see a new approach for them.