Quite possibly the most eagerly awaited VR title of the season, Medal of Honor: Above and Beyond is out now for PC-based headsets. It’s the return of a big FPS franchise, and with Respawn at the helm expectations were high. After all, Respawn was responsible for Titanfall and Apex Legends, as well as last year’s excellent Star Wars Jedi: Fallen Order.

There’s another dynamic at work there though, and it’s that the “AAA VR experience” needs a serious boost. Sony’s no longer putting out big VR titles for PSVR, and Oculus is shifting their attention to the Quest 2 rather than the more powerful Rift. Other major publishers also aren’t as eager to jump in anymore, so when EA announced Above and Beyond it was a pleasant surprise.

Unsurprisingly, Medal of Honor: Above and Beyond is a first person shooter that takes against the backdrop of World War 2. It only features six missions, but the campaign is close to ten hours long, so they’re lengthy affairs and they offer plenty of diversity as well. Sometimes you’ll be out in the open fields, while at other moments you’ll find yourself inside local buildings. Somewhat surprisingly, these interiors aren’t as interactive as you’d expect in a VR title – this definitely isn’t the physics playground that Half Life: Alyx was. 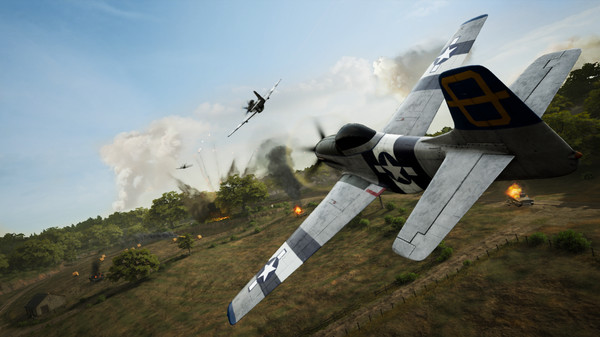 That’s not to say there Above and Beyond doesn’t include VR-specific mechanics – as interacting with cranks and pushing buttons is very much part of the game. These moments end up feeling somewhat tacked on though, and not as integral to the experience as the actual shooting portions – which often act as set pieces in between the delivery of the narrative. These narrative scenes are rather typical of modern FPS campaigns, though the visuals slightly resemble cartoon-like characters rather than the hyper-realistic brothers in arms you see in games like Call of Duty and Battlefield. It works well and this is a good looking game, but (coming from Cold War) it’s also a reminder of the limitations of VR at this moment in time.

The various action sequences in the game, which range from close quarters fights to spectacular scenes across huge stretches of land, are a lot of fun – even if they tend to feel ‘on rails’ for parts of them. But hiding and shooting from cover as you see enemies trying to flank you is a great sensation in VR, and enemy AI behavior is quite well done for a VR shooter as well – putting up a challenge when you need it to. Gunplay in general is quite fun, and includes scoped mechanics that feel somewhat similar to the scoped rifle in Phantom: Covert Ops where you peer through the scope for a very immersive effect.

Smooth turning with the thumbstick, at least at launch, wasn’t an option – you either have to physically turn (which is great when playing wireless on the Quest 2) or you can use the thumbstick to turn in increments, but that kind of snap-turning has always felt immersion-breaking to me and never quite comfortable. There’s a decent chance this will be patched in post-launch though, as technically it shouldn’t be too difficult to do.

Speaking of technical matters – Medal of Honor: Above and Beyond is incredibly resource-hungry, with recommended specs that include an Intel Core i7-9700K and a Geforce RTX 2080 video card. In addition, the game recommends that you install it to an SSD hard drive, which can be a challenge if you have a smaller model since it needs close to 200GB to be installed. Yikes. There’s a dynamic resolution feature that makes the game run on system with specs that are lower, but if you want to the optimal experience you need a serious VR rig (update: a post-release patch has included more video options to help boost your performance).

In all fairness, at least when it comes to the storage space, Above and Beyond does include high quality movie footage of veterans recalling their own tours of duty, which (if you enjoy documentaries) is a great addition that features stories I’d be happy to listen to even if I wasn’t playing a Medal of Honor game.

Does Medal of Honor: Above and Beyond live up to the expectations? Probably not, but expectations were high. It doesn’t feature the kind of “built for VR” feel that Alyx has, but it’s still a great thrill ride with plenty of historical backstory. If you’re a fan of the franchise you won’t want to miss this one, but it’s not the system seller that we were perhaps hoping for.