Milestone’s MXGP franchise returns for another annual update with MXGP 2020. It was released just in time for the game’s title to match the year we’re living in, but was it ready? We tested the PS4 version to find out.

MXGP 2020 is also available on the Xbox One and PC, with a PS5 version coming in a few weeks. From what we can tell there’s no free upgrade for those who bought the PS4 version, so that’s something to be mindful of in case you’re going the next gen route with your console soon.

As a motocross title, I regularly get the MXGP series confused with the Monster Energy Supercross games, which are also developed by Milestone, as are the MotoGP and Ride games. I guess you could say they have found their niche. And while MXGP and Supercross are both motocross games, MXGP veers more towards the serious/sim end of things instead of providing an arcade-like experience. 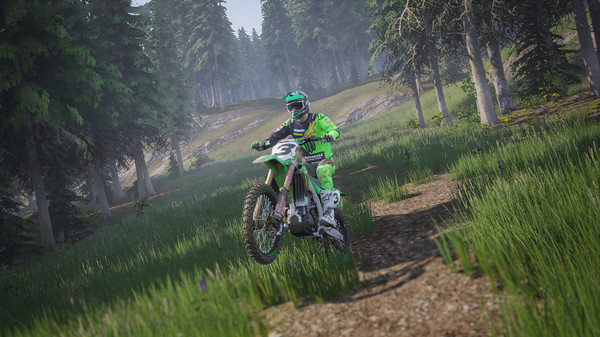 As such, MXGP is more challenging and less newcomer-friendly, but if you’ve played previous entries in the series then you’ll quickly get comfortable with this one as well. You’ll learn that the tracks you make on lap 1 are useful to ride on in a second lap, and that chasing behind someone can be easier than paving the way while out in front. This dynamic makes MXGP racing almost strategic in nature despite the high adrenaline rush of motocross, and I regularly found myself ‘flattening a shortcut’ during an early lap so that I could take advantage of it in the final minutes of the race. It’s a great feature, but it feels much less pronounced in the launch build of MXGP 2020 than it did in MXGP 2019.

MXGP 20 also features a few new and improved features that are great to have, especially because the game was released a little low on content – more on that in a minute. New is the track editor, which lets you create a new track according to your own preferences within minutes – with the ability to share your creations online with others as well.

Something similar can be done with the existing playground/training modes as well – which offer larger areas where you can get a feel for the bike and the controls. In MXGP, you can also put down waypoints to create makeshift routes through this scenery, which ties to the ability to compete for top times on your custom route online.

Because this is an officially licensed game, you also get plenty of official bikes, gear, riders and tracks to choose from, so there’s plenty of content for loyal fans of the sport to dig into. More striking, however, will be the content that’s missing. The track editor, for instance, was only patched in post-release, as were two of the tracks in the game. Additional tracks in the game aren’t expected until the new year, as is more content for the track editor.

Part of the reasoning behind that is the fact that we’ve lived in a global pandemic this year, and the real MXGP season was obviously also affected by this. We understand that, but at the same time that means that MXGP 2019 is a more fully-featured game at this point which can be picked up for a fraction of the price. It’s a shame, because the core foundations are definitely here, and in two or three months this’ll be a lovely MXGP game, especially with all the new track/waypoint editor functionality that should enhance replayability. Fingers crossed about a PS5 upgrade options, because we’d be happy to take another look once that version is ready.