The adventure game genre is certainly one of the most enduring niches in gaming today, and we’re looking at two recent examples: Mutropolis and The Uncertain – Light at the End, both of which are out on Steam right now. We’re also including a visual novel release, because Code: Realize ~Wintertide Miracles~ just made the jump to the Nintendo Switch!

The classic point and click variety of adventure games is alive and well with Mutropolis, which was developed by Pirita Studio and is being published Application Systems Heidelberg. ASH had been around for a long, long time, publishing games on the Atari ST way back in the 1980s – in black and white! They were around when the point and click genre boomed, so it’s nice to see them getting behind a game like Mutropolis.

The plot of Mutropolis takes place in the distant future, where most of humanity has moved to Mars because Earth is no longer considered habitable. From that perspective, you’re an archeologist looking for remnants of earlier mankind inside a cave, where you find references to a fabled city called Mutropolis. A modern day Atlantis or El Dorado, if you will. At that moment, you and your boss Totel are ambushed and you wake up to find him missing – which is where your quest starts anew.

The story is divided between several acts, each of which has specific characters and inventory items that play out their role within that act. In that sense, Mutropolis is structured very much like the classic adventure games of the Day of the Tentacle era – an era that clearly inspired the developers. The visual style is cartoon-like, there is plenty of lighthearted humor and fans will recognize plenty of reference to pop culture and the adventure game genre along the way.

Unfortunately, while Mutropolis is a really good adventure game and fun to play, it also brings a few of the drawbacks of those classic point and click adventure games with it. As with the classic Lucasarts games, every now and then Mutropolis will have you scratching your head and searching for things to do in each scene – pixel hunting for the next object or action that’ll let you progress.

One could argue that Telltale took streamlining the genre a little too far, but Mutropolis goes back to the roots to a degree where it’ll occasionally lead to mild frustration – cases where you’ll wish that protagonist Henry would steer you in the right direction somehow. Having said that, fans of that classic era of adventure games will no doubt want to pick this one up, it’s faithful to the genre like few other games are. Almost to a fault, but the charming story, characters and visuals make it easy to forgive that.

The Uncertain – Light at the End

A far more modern take on the adventure game genre is The Uncertain – Light at the End, which is the second game in what is supposed to be a trilogy from New Game Order and META Publishing – taking place in a futuristic world where you’re surrounded by robots in a tale of human survival. 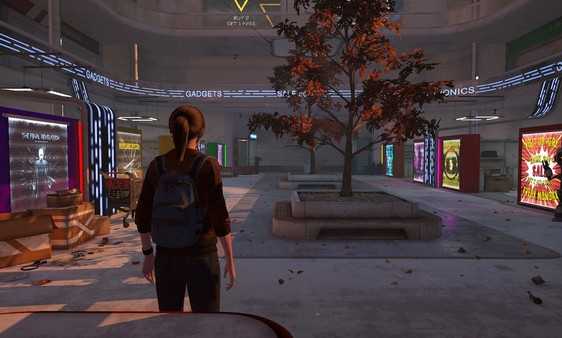 I only briefly played the first game, but quickly noticed that a change of perspective was applied to Light at the End. In the first game you play as a humanoid robot who sides with the human in their struggle against the robot oppressors, but this time you control one of the humans that’s being hunted and forced to hide.

Of course all of that sounds a bit like Terminator, John Connor and the Resistance, but The Uncertain – Light at the End plays out much more like a narrative-driven modern adventure game. Part of that can be seen in the visuals, which feature plenty of cinematic cutscenes alongside very detailed environments that are impressive to look at. The various characters feel a tad less polished in how they’re detailed and animated, but that’s not the biggest issues with them.

The biggest issue for the game’s character is that they’re hard to empathize with, and sometimes downright unlikeable. In a scenario where you’re clearly supposed to sympathize with the humans, this makes it hard to feel very engaged with the story. Hoping that something bad happens to Alex isn’t supposed to be what you’re thinking, methinks.

At the end of this relatively short episode I came away thinking that the developer bit off more than they could chew. The setting offers a ton of potential, but compared to the character development in Dontnod’s games or even the streamlined approach of Telltale’s adventures, this one feels like unrealized potential.

Code: Realize ~Wintertide Miracles~ is out on Nintendo Switch

It’s been a while since we reviewed Code: Realize ~Guardian of Rebirth~ on the PlayStation Vita, but just last year we took a look at Code: Realize ~Future Blessings~ when it came to the Nintendo Switch. Nintendo’s console/handheld hybrid is now quickly taking over the spot of go-to platform for visual novels you can take on the go, and this week Aksys released Code: Realize ~Wintertide Miracles~ for a platform, an epilogue release for Guardian of Rebirth that first came out in Japan back in 2017 and saw western releases for the PS4 and Vita in 2019.

The events in Code: Realize ~Wintertide Miracles~ are all structured as epilogues to the events in Guardian of Rebirth, with winter-themed stories that make me wonder why this wasn’t released during the holiday season – though the PlayStation versions also missed that mark by about two months back in 2019. Characters like Lupin, Saint-Germain, Cardia and Sholmes are all featured, and it certainly helps a lot if you’re familiar with the core narrative – Wintertide Miracles isn’t newcomer-friendly.

On top of the epilogues, there is also a brand new storyline to uncover starring Cardia’s friend Cantarella, as well as the option to explore dating through triangle setups. There’s a lot of fan service in this one, and it carries over the limited physical edition that’s also available and includes things like a set of buttons and a keychain. Definitely one for the fans who didn’t play this on the Vita or PS4 yet.