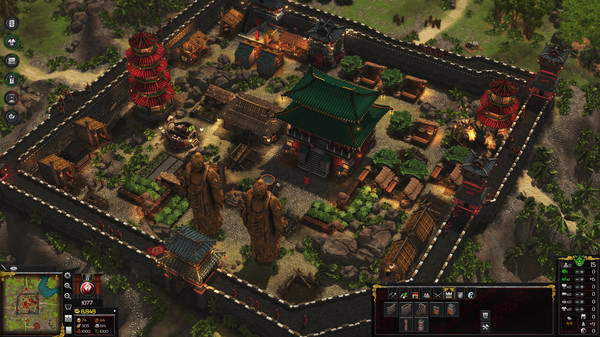 Stronghold Warlords had been eagerly anticipated by PC strategy game veterans. Firefly Studios’ next entry in the long-running franchise is finally here, so we jumped on the opportunity to see how it evolved since 2014’s Stronghold Crusader II.

The Stronghold series has been around for almost 20 years at this point, the first game launching when games came on CD-ROM discs and most PCs were running Windows 98 as their operating system of choice because Windows XP had only just come out. While many of the big strategy franchises of that era are now pretty much dormant (with the exception of Total War), Stronghold is alive and well and has mostly stayed true to its core concepts over all those years.

Stronghold Warlords is no exception, even if it does bring a few new touches to the table. The action is still focused around castle-building, fortification and armed conflict as you defend your keep against invaders – keeping an economy up and running so that you eventually can amass the forces needed to take the fight to the enemy’s stronghold. Different game modes and objectives can stray from this formula, but it was and is the heart and soul of the Stronghold franchise.

The game’s campaign will take you from your humble beginnings as a settlement with few resources all the way to a thriving stronghold with a strong military, but this entry in the franchise introduces Warlords and alliances – offering an additional layer to the armed conflicts, and something that was also successfully added to the Total War franchise. Your “currency” here are diplomacy points that you can use to sway a warlord to pledge his loyalty to you – although you can also resort to armed conflict if you prefer or if you’re low on diplomacy points.

These diplomacy points are automatically gathered over time, but you can speed up the process by building embassies inside your strongholds. Getting a warlord to join you isn’t just a one-time expense either, as issuing orders will also cost you more points each time you do so. This is an interesting dynamic though, because you can use them to either strengthen your economy, receive additional units or cause a distraction by having them attack an enemy from a different direction while you prepare for your big push.

Five different campaigns to choose from means that you have access to five different sets of leaders and units as well, so there is a good amount of campaign content here, with some decent amount of diversity in their objectives, units and goals. The narrative side of the campaigns could have used some more work though, because although the gameplay is rock solid the different factions never really came alive for me due to a relative lack of cutscenes, voice-overs and narrative suspense.

There are a few additional modes to play besides completing the five core campaigns, but they don’t bring a lot that’s new to the table – skirmish and multiplayer aren’t going to surprise anyone at this point. After over six years since the last game, I couldn’t help but shake the feeling that I was expecting more – even while I was having a lot of fun with the still-excellent gameplay.

I suppose the same holds true for the visuals in Stronghold Warlords, which are perfectly fine but didn’t impress me like the ones in (for example) Dawn of War III or the SpellForce games. Luckily, Stronghold Warlords impresses where it matters most: fun and polished gameplay mechanics that remind us why we fell in love with the series in the first place.