Those who have been following us for a while know that we’re fans of “retro”, especially when that means going back quite a bit to the arcade origins of modern gaming. Capcom’s new collection of classic arcade games, the Capcom Arcade Stadium, does just that. Released earlier for the Switch, it’s now come to PC, PlayStation and Xbox as well – time to take a closer look.

The Capcom Arcade Stadium isn’t really a bundle of games in the traditional sense (where a bunch of classics were bundled on a disc and then sold), but more of a platform concept for Capcom – powered by emulation of classic arcade boards. It’s one that will allow them to sell additional titles down the road as DLC add-ons, but also allows for a more flexible delivery method as well. The actual “Arcade Stadium” is actually free, but only includes a single game: 1943: The Battle of Midway.

From there, you can either buy everything there is at launch (a total of 30 games), or select one of the three individual packs of ten games – organized by era. The first one is dubbed “Dawn of the Arcade” and focuses on the 1984-1988 time period, including games like 1942, Ghouls ‘n Ghosts, Commando, Bionic Commando and Forgotten Worlds. For diversity and technical reasons, it’s also the most interesting period in the entire collection, because the ten games on offer were built on a variety of arcade hardware – with early games like 1942 running on Z80 hardware and later ones like Forgotten Worlds being built on Capcom’s CP System.

Heading over to the second bundle, you’re looking at the “Arcade Revolution” set of games that includes Strider, Final Fight, Street Fighter II and Mercs – released between 1989 and 1992. All of the games in this set run on Capcom’s extremely successful CP System, also called CPS-1, and although it was introduced at the tail end of the 1980s you can really see a leap forward in these games. Final Fight’s large sprites were incredibly impressive at the time (where games like Double Dragon were the gold standard), and Street Fighter II was a revolution in and of its own – bridging the cap to the console generation with a few excellent ports as well.

The third bundle, Arcade Evolution, spans the period from 1992 to 2001, which is when arcades began to lose ground and home consoles took over. It’s where we see Capcom transitioning from their CPS-1 hardware to the more advanced CPS-2 board, which resulted in better visuals and powered some true classics. Most of these aren’t included here though, and notable titles like Darkstalkers, Marvel vs Capcom and the Street Fighter Alpha series are nowhere to be found even though they ran on the same hardware. We’re assuming that, at least in some cases, licensing issues are to blame here. 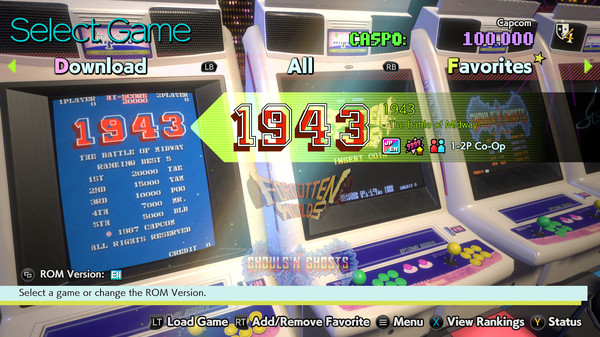 The games that are included in this era include the likes of Giga Wing and Armored Warriors as well as sequels in the 1942 franchise: 19xx: The War Against Destiny and 1944: The Loop Master are both here. Also included are two more versions of Street Fighter II, but instead of Hyper Fighting and Super Street Fighter II Turbo we would have rather played some of the games that were left out.

Unsurprisingly, all of the included games run well on today’s hardware – and in many cases you can select between different versions of the game from different regions of the world as well. There’s also a variety of display options, including the ability to add classic scanlines or configure your background imagine (all of these games were originally released on 4:3 displays). Those who play around with emulation on other systems will probably also be familiar with the ability to rewind the action if things go wrong, and that’s been included here as well. 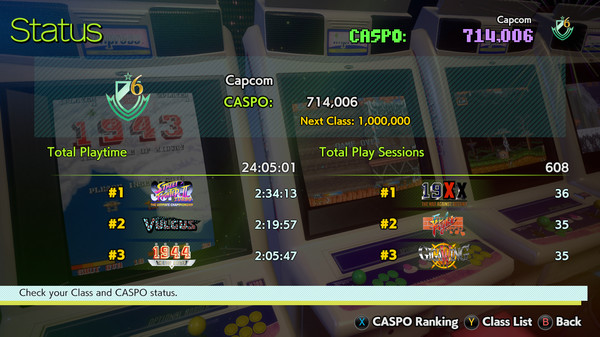 One thing that is quite novel, however, is how Capcom is implementing that feeling of wrapping up a game in the arcade and being able to put down your initials on the high score table. Here, you accumulate points on a system called CASPO, which is a sort of online leaderboard that represents your total score across all of the games you own and play – with bonus points awarded for reaching special achievements in individual games as well.

And although some people won’t care about their online rank, your CASPO score also unlocks additional goodies – though unfortunately these are mostly themes for your screens and not museum-like stuff about the included games, which is always interesting to have without having to dive into wikipedia and all kinds of other online resources.

If you enjoy retro arcade gaming then this is a must-have collection, though most of the true classics are in the first two of the three bundles. You can combine them for a cheaper price though, and the later era games are solid fun in their own right as well. The biggest drawback here is that you might already own many of these games because Capcom released them in various forms over the years. If you bought the Capcom Classic Collection on the PS2 and invested in the Capcom Arcade Cabinet for the PS3, then having to buy the same game all over again might leave a bitter aftertaste. Hopefully, with backwards/forwards compatibility now more of a thing, that’s a thing of the past.