The excellent but terribly short Star Wars: Tales From the Galaxy’s Edge has received a good helping of additional content with the Last Call DLC that just launched. Does it elevate the experience? Here are our thoughts.

When it launched, ILMxLAB’s Star Wars: Tales From the Galaxy’s Edge instantly became a showpiece for the Oculus Quest (2) headset. While many games clearly show how the Quest is a tad underpowered compared to other platforms, Galaxy’s Edge is absolutely stunning and succeeds at taking you to a galaxy far, far away. Its main problem was that it was low on content, which is why Last Call felt more than welcome when it was announced. And while it could have been filler, it doesn’t disappoint.

One thing that’s different about Galaxy’s Edge is that where Vader Immortal stayed close to the films (with the obvious link to the titular bad guy), Galaxy’s Edge felt more like a standalone adventure – despite some familiar faces. Last Call continues this with a hefty expansion that includes new missions and an expanded bar at Seezelslak’s, but also gives you more gameplay options through upgrades that weren’t previously available. 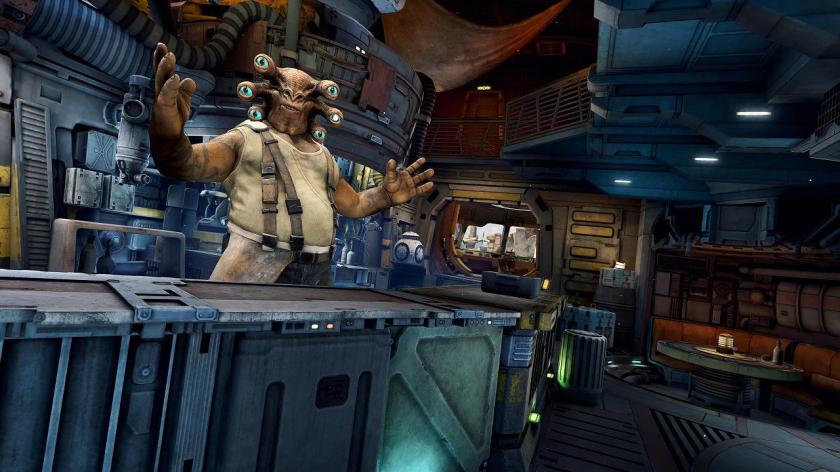 There’s a new story campaign as well, and it introduces us to Dok-Ondar, who deals in intergalactic antiques. He’s on the lookout for a Sith artifact that was hidden away by the Jedi to keep it safe because of the immense and dark power it holds, which is also the reason you can’t expect to just stroll in and take it without much competition. Others want the same thing, so you set off with some haste to explore a new section of Batuu across three locations. There’s a nice balance to the narrative where hardcore fans will find plenty of nods to the existing Star Wars lore, but where it’s never in the way of the enjoyment of more casual fans – who can just focus on a short action adventure with a few puzzles.

The campaign includes new enemies as well as weapons and collectibles that can be traded in for some extremely useful new upgrades and abilities, which includes a jetpack so you can channel your inner bounty hunter. You can also increase your ability to carry weapons, and new guns include a blaster that can be charged if the situation gives you the time to do it, as well as an explosive launcher that deals big amounts of damage.

And while you’ll complete this main story campaign in under an hour and a half, there are also two additional mini campaigns to enjoy thanks to new Tales. One of these casts you as an assassin droid called IG-88, but while it’s empowering to play his “Bounty of Boggs Triff” mission he does feel a tad overpowered, making the quest feel lacking in terms of it challenge level. A more balanced experience can be found in the more narrative-rich mission The Sacred Garden, which has players returning as Ady’Sun Zee to the High Republic.

On its own, the Last Call expansion for Star Wars: Tales From The Galaxy’s Edge clocks in at just over two hours of content, but as an add-on that also gives you access to additional content it rounds out Tales From The Galaxy’s Edge nicely. There are also a few nice easter eggs to be found, both for fans of the original films and for those who have been to the new Galaxy’s Edge theme park additions at Disney’s parks. Yes, it’s short, even with the new content, but it’s an experience that Star Wars fans won’t want to miss.