We’d been following 1C’s Reverie Knights Tactics for a while now, and now that it’s been released for both PCs and consoles we finally got to go hands on with it. As a tactical RPG, it bears a resemblance to games like Disgaea and the Fire Emblem games, so we definitely had high hopes when we booted this one up on a PlayStation 4.

Reverie Knights Tactics, which was developed by 40 Giants Entertainment, doesn’t waste any time letting us know it’s a fantasy-heavy game. We’re taken to the Tolkien-sounding city of Lennórien, which was founded by the elves but has seen better times after suffering a brutal goblin attack and being renamed to Rarnaak in the process. A group of scouts and warriors was sent to see if order could be restored, but it’s been years since anyone’s heard from them. Now, as Aurora (the daughter of one of the people in that group), you set out to figure out what went on and find your father.

For fantasy fans, the story is definitely one of the highlights in Reverie Knights Tactics – it uses familiar tropes but the narrative is well fleshed out and kept us engaged for the entire duration of the campaign. At about ten hours it’s not the longest game – especially among tactical RPGs – but even without being multi-layered or deep the story manages to entertain. Part of the story can be shaped through your choices in conversation as well, as Aurora can opt to align more with ‘chaos’ or ‘order’ through her answers. This has an impact on how others view her and react to her, so this will give you options to change your path on a second playthrough as well.

Outside of the narrative elements, you’ll spend the bulk of your time in combat, which takes place on isometrical grids with colorful visuals that evoke memories of games like Disgaea. Here, each party member (Aurora picks up friends along the way) get two actions per turn, which usually means moving into position and attack or moving twice to cover more distance if a double attack isn’t possible. 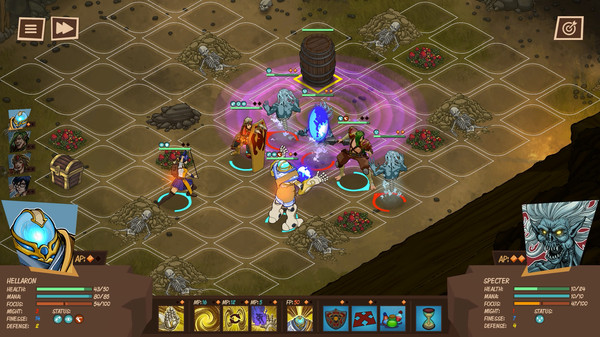 Positioning matters, of course, but in Reverie Knights Tactics that also includes where you are in relation to objects in the environment. You can cause massive damage by attacking stone pillars that fall on top of your enemy, or cause a plant to shoot out poison and hit those near to it. And on top of alternating between magic attacks and regular attacks, you can also perform team attacks – with different attack types also appearing as optional objectives in a battle that can net you some rewards at the end of it. One of these is called Cogni, which acts as the in-game currency here and lets you level up and acquire stronger equipment.

Looking outside of combat, Reverie Knights Tactics also features the occasional puzzle, though it doesn’t hide the fact that, gameplay-wise, this isn’t the most diverse or rewarding experience outside of the solid turn-based battles you fight. It is, however, a fun tactics game with a fantasy setting that provides a good ten hours of entertaining story-driven gameplay.