Although Zen Studios has also released well-received games like CastleStorm and Operencia: The Stolen Sun, a lot of gamers will associate them with their work in the pinball genre. They’re getting ready to launch Pinball FX as the latest version of their platform, but before they do there’s one more awesome new table to enjoy for FX 3 (for which tables will migrate to the new platform). That table is Indiana Jones: The Pinball Adventure, and it’s a must have for fans of the original trilogy.

And while Zen has designed their own tables for their digital pinball platforms, sometimes based on famous pop culture IPs, most of their recent releases have been recreations of physical tables that were licensed from legendary pinball manufacturers like Williams. Many of those have been original creations, but Williams was also responsible for the 1993 adaptation of the Indiana Jones franchise. It wasn’t included in the six (!) Williams packs that Zen previously released, and we’re guessing this must have something to do with the complex world of licensing. It’s here now though, and we tried out both the big screen version on a PlayStation 4 Pro and the portable version running on a Nintendo Switch. 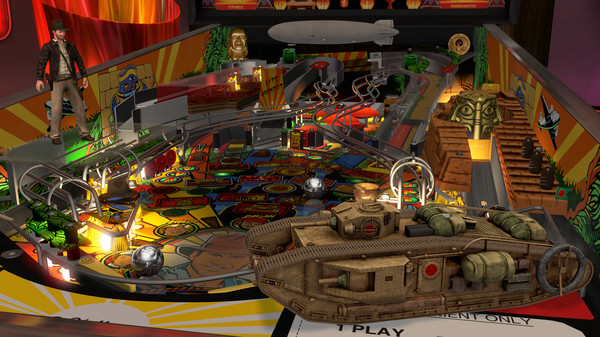 If you’ve ever seen the Indiana Jones pinball table in real life, you’ll immediately notice how great this Pinball FX3 version looks, though Zen has added a few enhancements of their own as well. While the table layout is almost identical, some of the stationary elements that are on the original table have now been animated. Good examples of these are the airplane models that now actually take off, land and fly around (this would be great in VR), but what’s especially fun is seeing an animated Indy move around the table, reliving some of his greatest moments.

Zen further improved the table by replacing the portrait of Indiana Jones at the bottom of the table with a video screen that will periodically show iconic scenes from the first three films. Combined with the audio/voice clips that regularly play it’s an audiovisual feast for fans of the character, even if the clips are recreated animations rather than film footage – which is probably for the better when you consider the size of the Switch in handheld mode.

Indiana Jones: The Pinball Adventure lives up to its name by including tons of little mini games and challenges that tie into the events of the films or at least feel inspired by them – dodging traps and engaging in daring combat. Some of these play out on the table itself (like steering the ball past some holes by titling an elevated mini table left and right), while others are played on the machine’s display – a then relatively new technology that boomed in the 1990s.

While you can play without any guidance, and timed modes give you unlimited balls for the duration of your sessions, there are a lot of (hidden) objectives you can strive for on the table, and if you hit enough of them you’ll gain access to the Wizard mode. While you can enjoy the table casually as a fan, this is something worth looking into as you familiarize yourself with the table’s rules and objectives when you get better and think you know the table’s secrets, only to find out there’s a lot more to discover.

This one’s a blast to play and its looks and sounds great. The biggest drawback here is the price, as Indiana Jones comes as a single table but has a higher price tag than the various Williams packs released previously – but contained three tables each. Again, we’re guessing licensing is partly the culprit here, but Indy fans get a great table here that they wouldn’t want to miss out on. With a strong tie-in to the license, seen on the table as well as the animated elements and dot matrix display, this is one of the best examples of fan service in the FX3 franchise thus far. Did we mention it includes John Williams’ iconic theme?