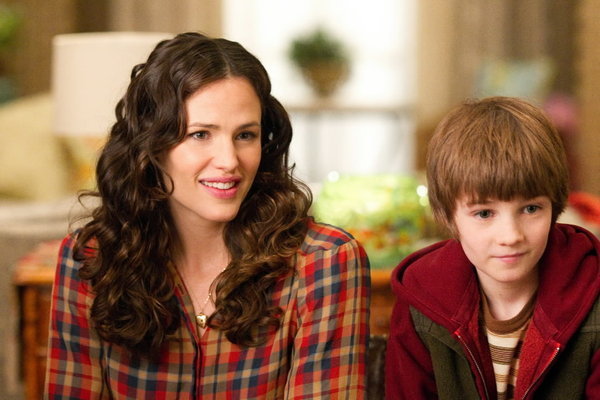 I do my best to avoid previews. I’ve learned that they give too much away and cloud my judgment. I still want there to be an element of surprise when I sit down to watch a movie. So when I started watching The Odd Life of Timothy Green (which came out on Bluray this week), I didn’t know what I was in store for with one small exception. I had heard there was a YouTube video making the rounds in which the parents of two young boys filmed their sons’ hysterical, tear-filled reaction to the Disney film.

Remembering the tears I shed with every viewing of Old Yeller (not to mention Dumbo and Bambi!), I wasn’t surprised to hear Disney was turning out another tear-jerker and I was simultaneously relieved to have grown up in a pre-internet world.

The Odd Life of Timothy Green opens with a married couple, Mr. and Mrs. Green (played by Joel Edgerton and Jennifer Garner), being interviewed at an adoption agency. When asked about their experience with children the Greens have only filled in a one-word response on their adoption form: “Timothy.” A doubtful look is exchanged between the man and woman conducting the interview and from here the Greens take us back to the previous September where their story, or rather Timothy’s story, begins.

After years of trying, the Greens are finally told that they are not able to have children. They decide that it is time to move on emotionally but not before spending one last evening fantasizing aloud about what could have been. In a touching scene, the couple laugh and cry together over a bottle of wine as they hastily jot down on scraps of paper what they would have wanted for their child: A child who loves and is loved, who is musical, who isn’t athletic but scores the winning soccer goal. Compiling the scraps of paper, they place them in a wooden box and bury them in their garden.

To be honest, the scene which follows felt more like something out of a horror movie than your usual Disney fare. This is where avoiding trailers can make things a whole lot more interesting, because you don’t know what’s coming. A freak thunderstorm awakens the couple in the middle of the night and they find themselves following trails of fresh dirt throughout the house. What they find at the end of the trails is a naked boy caked in mud. This is where any resemblance to a horror movie ends and the couple’s new odd life begins.

It doesn’t take long for the Greens to come to the realization that, Timothy, as he introduces himself, is a compilation of the child they had wished for. A child who has just sprung from their own garden – sort of like the Cabbage Patch Kid dolls of yore but already 10 years old.

CJ Adams, the young actor who plays Timothy, is likable and plays “different” well, without ever crossing the line of being irritating or tiresome. Timothy is clearly different from other children right from the start but what makes Timothy so endearing is that he is perfectly content with who he is. Even if the adults around him are concerned about the small things: like the way he sometimes stops whatever he is doing to stand still, arms stretched wide, head lifted towards the sky to bask in the warmth of the sun. Or with their well-meaning attempts to cover the leaves growing from his legs with knee-high socks. Yes, leaves.

The supporting characters in Timothy’s world are fun in their own right. Peter Hedges (“What’s Eating Gilbert Grape” and “About a Boy”), who wrote and directed the film, has a way of breathing life into even the most minor of characters. Take Timothy’s friend Joni, who while an influential character, has very few actual lines in the film but is completely captivating as a girl keeping her own secret. Timothy’s Aunt Beth is a perfectionist mom whom we can all recognize in our own lives but somehow even her unlikableness is likable. While all of the characters who interact with Timothy learn important life lessons from him (and interestingly enough not the other way around) it’s done in such a way that it doesn’t quite feel too heavy-handed or sappy.

In the end “The Odd Life of Timothy Green” feels like a new fairytale driven by a sweet plot and charming, relatable characters. So did I shed a tear? Yes, I’ll admit to at least one. Thankfully there just isn’t proof of it on YouTube.