Steamworld Heist is part turn-based strategy, part Worms, and a lot of fun to play. Here’s our review.

One problem that Nintendo’s 3DS has is that people who don’t own the system will have trouble coming up with three titles that will get them interested in buying the handheld. There are a few first party games, but other than that you’re not likely to come up with many 3DS-exclusive games that will sway gamers into the direction of Nintendo’s handheld. That’s a shame, because Steamworld Heist came out for the 3DS last year and it’s a real gem of a game.

Luckily, developer Image & Form has now branched out to PC, Vita and PS4 with their game – allowing a far wider range of gamers to enjoy their creation. Steamworld Heist is a sequel of sorts to Steamworld Dig, though mainly in name and aesthetic. In the game, you are the captain of a band of space pirates/cowboys and will attempt to rob enemy ships of their precious loot. 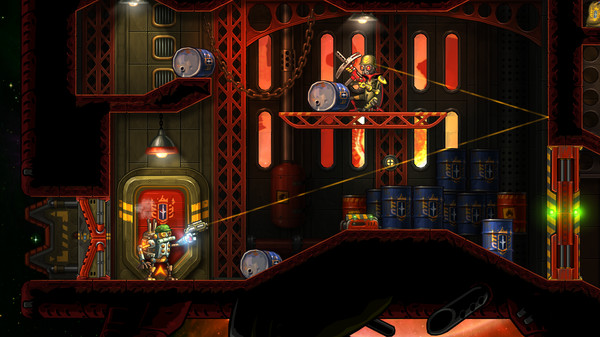 This is done in a turn-based manner, though the action is relatively quick-paced when compared to other games in the genre. It’s also a side scroller, and one of the important game dynamics is that you can manually aim all your shots – giving you more control over the outcome than what’s the norm in turn-based strategy. In that regard, Steamworld Heist reminded us a lot of the Worms series, even though this game is far more objective-oriented. But just as you do in Steam, you will be aiming your bullets and projectiles either at enemies directly or past obstacles – often using your ability to bounce shots off surfaces. It’s a lot of fun to play, especially because the game’s setting makes your actions more meaningful than the straight up combat in Worms.

As you progress, you’ll be able to upgrade your team members with new abilities and more powerful weapons as well, bringing subtle changes to the game’s formula even though most upgrades mainly serve to keep your skillset in line with the increased difficulty levels. No matter your skill level though, the amount of control you have over your shots is relative. The game prides itself on giving you control over a reliance on ‘luck’ (the way other turn based games calculate your outcome), but there’s still a fair bit of luck involved in how your shots end up doing – just like it is in Worms. Practice helps, but pure skill alone won’t cut it.

Perhaps our description above gives you the impression that Steamworld Heist is about making sure you kill everyone before they kill you, but the main objective – as pointed out in the game’s title – is actually to make your way out of a level with as much loot as you can carry. This makes for tactical decisions where perhaps straight on combat isn’t always the best answer, and you’ll regularly find yourself in tense situations where you’re not sure if you’ll make it out – seeing as how enemies have you in their sights already. This is where the game feels less like Worms, and more like a good heist movie.

Also available right away is a DLC package called “The Outsider”. It doesn’t change the game in some sort of radical way, but it does give you more to enjoy. There’s an extra character to play with as well as new items, but most of all you’ll be interested in the DLC because if features just over a handful’s worth of extra missions to play. It’s a package that’s so seamless that it feels like it should have been part of the main game to begin with, but since it wasn’t in the original 3DS game it’s understandable that the base experience has been kept consistent.

Steamworld Heist feels like a great little indie game – especially on the Vita, where this is one of our favorite games this year so far. We’re glad this jumped ship and made it from the 3DS to Sony’s handheld, and those interested in playing it on a bigger screen now also have two options.