Robinson: The Journey arrives and promises to be one of the real showcases for Playstation VR technology. Does it live up the hype?

Those who have been following the VR craze during these past few years no doubt remember Crytek’s “dino demo” – which saw you emerge in a jungle where, moment later, a T-Rex appeared in the distance. Impressive in itself, and rendered in stunning details, the real ‘wow’ moment of the demo was when the T-Rex notices you and moves in for the attack.

That experience has now been expanded to a full game, an (almost) launch title for the Playstation VR called Robinson: The Journey. In the game, you play Robin, who has survived a crash on an alien planet and has to survive while figuring out what to do next. You quickly discover that the planet is inhabited by dinosaurs, and befriend a young T-Rex in the process. Most of your interactions, however, are with the Portal-like AI beings that help you along with banter and tips that advance the story.

Visually, the game is a hybrid of Jurassic Park, Avatar and Portal – and it’s absolutely stunning to walk around in. The dinosaurs and landscapes provide a prehistoric feel, while sci-fi influences and the AI helpers give it a Portal vibe – though the dinosaurs are the real stars of the show. Crytek has done a wonderful job in creating a showpiece of a game that allows the inner child in us to actually walk alongside dinosaurs, and it’s the kind of awe-inspiring experience that Jurassic Park was almost 25 years ago.

The immersion breaks down a little when you actually get down to Robinson’s gameplay elements though, because if you take away the VR elements and beautiful vistas then the game itself is relatively basic in nature. Grabbing items, putting them elsewhere, solving small puzzles here and here – they all feel like they merely serve the purpose of advancing the experience, rather than delivering a unique gameplay experience. 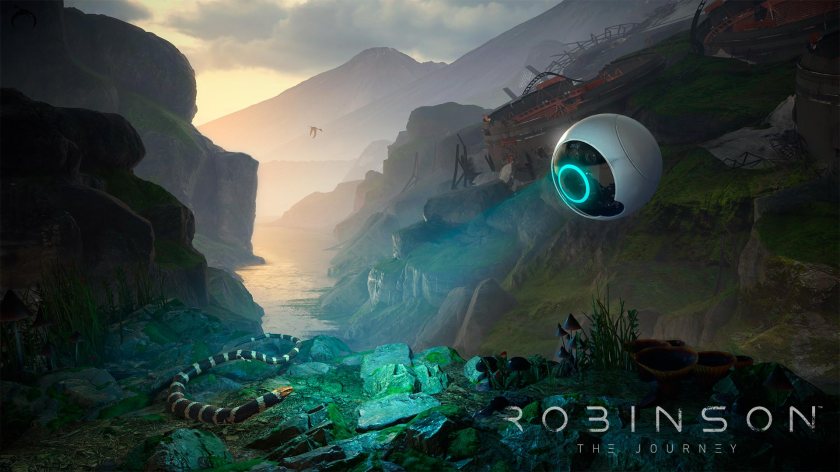 The game’s controls work fine for the most part, though placing items can be a little finicky – causing you to backtrack and pick up the re-spawned item again if it fell out of reach. You also have some degree of control over your pet T-Rex, which is fun and mostly light-hearted. In addition to this, you’ll also be scanning a variety of objects and life forms – which is done through a form of minigame where you collect colored dots.

Although Robinson isn’t the greatest game money can buy, and not even the greatest VR game, I do consider it a must-buy for Playstation VR owners. As an experience, it’s unrivalled at this time – and if you invested 399 dollars or euros then you owe it to yourself to play through this adventure at least once. No one will remember the gameplay in a few years, but everyone will remember the first time they played Robinson: The Journey.