New Vita games are far and few between these days, but every now and then we’re surprised by a new release – one of the more pleasant recent surprises has been iO, which was released together with the PS4 version as a digital bundle.

We actually played iO a few years ago already, when it was an Android title that we played when we met with developer Gamious during a trade show event. The concept was great, the game was fun to play – but after a few levels my limited skills with touchscreen screens had me wishing I could play iO using more traditional controls. Cue 2017 and my wish has been granted – even though a Steam version came out earlier as well.

Gameplay in iO is momentum-based, but basically revolves around trying to get a ball from a starting point to a goal marker. Easier said than done, because obstacles are quickly introduced and in many cases you need to employ special techniques in order to progress. The controls are simple enough, with left and right being your only choices along with the ability to grow or shrink your ball. Doing so allows you to overcome gaps and fit through small openings, but it also builds (or decreases) momentum, allowing you to do things like scaling a wall. 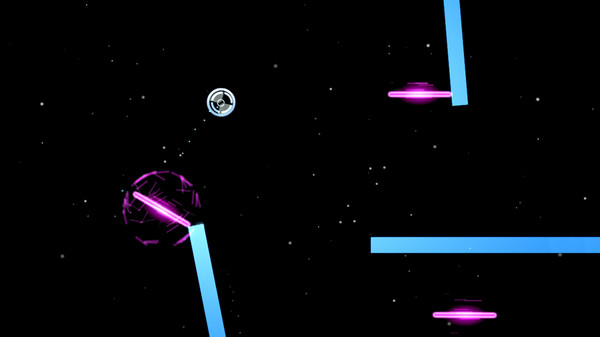 Visually, iO sports a minimalist design, with many of the levels looking like neon wireframe models that are color-coded to signify what each section does. For instance, you can teleport yourself using purple sections, but will want to stay away from the lethal red sections. The most fun bits generally involve yellow elements, which means that sections of the level can be moved by running into them, balancing on top of them or otherwise interacting with them – there’s some real creativity here.

iO is rather unique, but did remind me of another obstacle-based game: the Trials series. Of course iO has a much more minimalist approach, but it had a similar hook for me – giving me that feeling that I could beat a level even if it took me over a dozen tries. Another similarity is in the vast number of levels that’s available to you – there are 150 basic stages and after that there is a collection of 75 stages that are even more difficult. In some cases, too difficult, but that’s probably just me seeing as how I never was able to complete any of the “extreme” levels in Trials Fusion either.

An amazing fit with the Vita, iO is a lot of fun to play on Sony’s handheld. Its gameplay lends itself perfectly to those moments where you have only a few minutes to spare, and its visual style means that nothing was lost in the technical translation to the Vita. Since nothing like Trials ever made it to the Vita, this is a title you don’t want to miss if you’re into the genre – a very pleasant surprise in what will no doubt be a tough year for the Vita.