Warhammer Quest might be a familiar name to you already, and it could be because you’re interested in board games by Games Workshop and/or in video games based on them. This time, we’re talking about the newly released videogame version for Xbox One and PS4 – we played it on Xbox One.

A straight up board game adaptation, it would be tempting to start comparing Warhammer Quest to the recent Blood Bowl titles – but the origins of Warhammer Quest lie elsewhere. The game is actually a successor to Hero Quest, and as such is a lot more like the Hero Quest and Space Hulk videogames that I played back in the early 90s on my Atari ST and Amiga. Unfortunately, it’s also relatively bare bones when compared to modern day turn based strategy games – much like how a younger gamer would see those early 90s games.

The reason for this is a fairly simple one – the videogame adaptation of Warhammer Quest started out in 2013 as a game that was designed for tablets, and with the technical, control and gameplay limitations of 2013 tablets in mind. As such, Warhammer Quest is a game best enjoyed in short bursts and tends to get repetitive during longer gameplay sessions. Graphics are of the top-down variety, even though Hero Quest had an isometric option back in 1991.

As a game with mobile origins, Warhammer Quest is relatively light on your strategic options. Your band of adventurers sets out on quests, kill off fantasy creatures, and receive rewards for their troubles. Within a mission, it often suffices to let your melee guys go in first while your ranged attackers stay a little behind – an almost guaranteed way to succeed, leading to repetitiveness fairly quickly.

In between missions, you can level up in towns before embarking on your next quest. You can buy and sell loot as well, and you can swap out party members. Upgrading isn’t terribly deep, as you basically just literally go up to a higher skill level – you’re not choosing an ability to focus on or a skill to unlock. 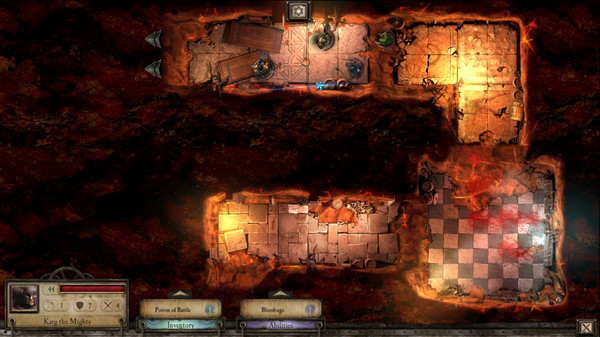 Is it all bad? No, definitely not, because the base gameplay – although simplified from the board game, is solid. It’s also a very well-polished game. It’s “only 2D”, but top-down tile-based games rarely look and sound this good. Obviously that is partly due to the fact that the genre has moved on to isometric and 3D visuals, but if you’re in the mood for a more traditional approach then Warhammer Quest fits that bill.

It’s hard to recommend this Xbox One title though, because its target audience is probably best suited to the iOS version. But if mobile gaming is not your thing and you regularly wish that you had something ‘strategy lite’ to play for 20 minutes at a time on your Xbox One, then this could be your game. I’m just not convinced that there are too many gamers like that out there. Personally, I’d rather play the brand new Warhammer Quest – Shadows over Hamerhal board game that Games Workshop is releasing around the same time.