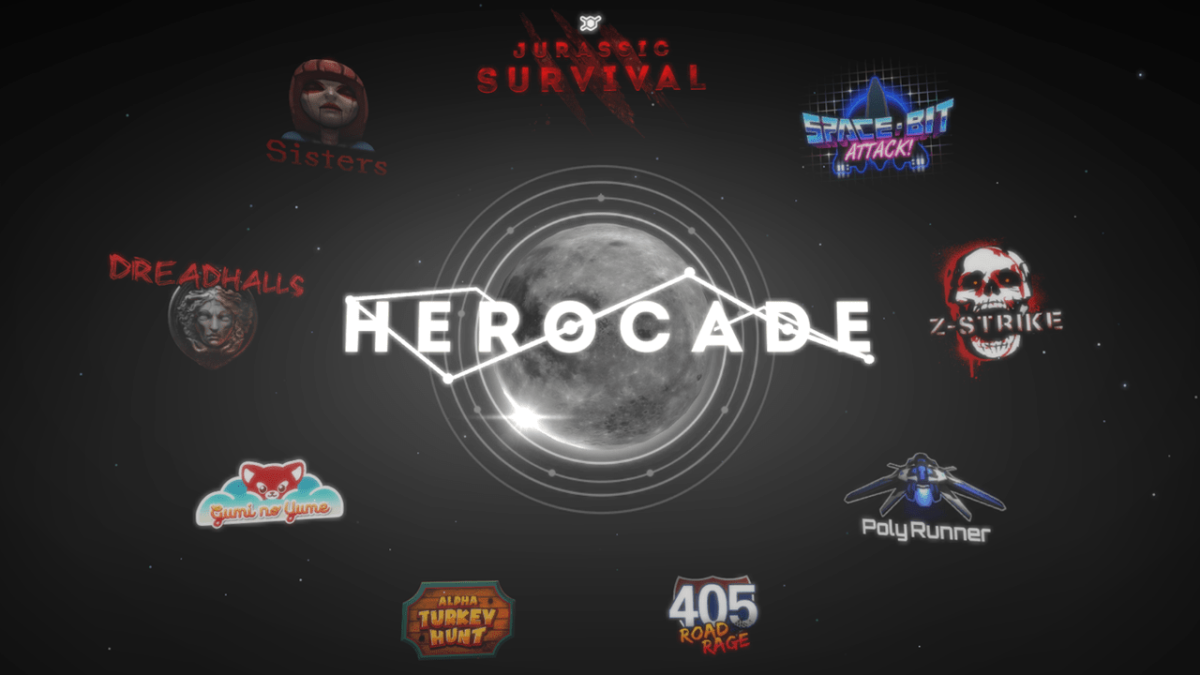 After Playstation VR Worlds, there is finally another compilation of Playstation VR titles available. Herocade offers no less than nine different games for you to play, and it’s still cheaper than about half the VR games out there. Here’s our review.

Of course, there’s a catch with that – most of the games in this compilation have been previously released as mobile titles, and the quality of the games generally reflects that fact as well. That doesn’t mean they’re necessarily bad, but they’re quite often very short in nature and feel a tad experimental – like many of the games you might have tried on a Gear VR before.

Not every game on offer here is a winner, especially the ones where far better alternatives are already available for Playstation VR. One example of this is Zombie Strike, where you’re shooting zombies while riding a helicopter. Sounds neat enough on paper, but after Farpoint (and the Aim controller) there’s no reason to try Zombie Strike instead – except for the price point. Wave shooter Alpha Turkey Hunt is no Lethal VR, and Jurassic Survival is no ARK.

Things become more interesting when you play Space Bit Attack and Gumi No Yumi though. The first is a VR adaptation of Space Invaders, and while it’s not exactly great in the gameplay department (it feels like a tech demo more than anything) it’s cool to see a classic like this in virtual reality. Gumi No Yumi was previously released for Gear VR as well, and it’s a puzzle game not too unlike Waddle Home in terms of its visual style, a game which is also available for Playstation VR.

If you enjoy endless runners then PolyRunner and 405 Road Rage are two games that you’ll get some good mileage out of. PolyRunner is a bit like Race the Sun, which is also playable in VR after an update earlier this year – but that game costs over half of what this entire package costs. Road Rage isn’t based on the classic game Road Rash, but car-based and lacking a first person view. This is true for PolyRunner as well, but it’s easier to forgive in that scenario because deep space is much wider than the roads you drive on in 405 Road Rage.

The two best games on offer aren’t new either, but they’re both considered showcase products for mobile devices that support VR. Dreadhalls is an excellent horror-themed dungeon crawler, and Sisters is more of a passive experience than a game but well worth checking out – and even better to have other people try.

In Sisters, you remain stationary inside a room, when lights start going on and off and creepy dolls start randomly moving around. Wearing a pair of decent headphones, this is a must-try experience and far better than it was when I played it using my smartphone a year or two ago.

In Dreadhalls, you’re far from stationary, as you move around a randomly generated dungeon trying to stay out of the hands of the monsters that lurk within. Resident Evil 7 showed us how effective horror can be in VR, but Dreadhalls – not being story-driven and with different dungeons every time – is a great ‘pick up and play’ alternative at a fraction of the price.

As with any compilation – even the premium package that is VR Worlds – the quality of what’s on offer varies. But at its price point, it’s a great sampler of what VR can deliver in a variety of ways. If you’re a seasoned VR player and already have an extensive library of titles available to you then this won’t grab or hold your attention, but for newcomers this is a great way to build your collection quickly.