Son of Scoregasm is a brand new and addictive twin stick shooter for the Playstation Vita. Available at a budget price, it’s a great little time waster as well as essential fodder for score-hungry gamers who enjoy a bit of competition.

As the title might suggest, Son of Scoregasm is actually a sequel to a PC title that I have to admit I never played. Its title is a pun much like DID’s Wargasm in the nineties was, and where that game had warfare at its front it’s all about high scores in Son of Scoregasm. If you really want then there’s a story campaign as well, but it’s completely silly and disconnected from the actual gameplay. Probably intentionally so, since a story about the earth’s king who wants his cookies back is hard to connect to a sci-fi shooter, even if you get to see which cookie you reclaimed after beating a level. 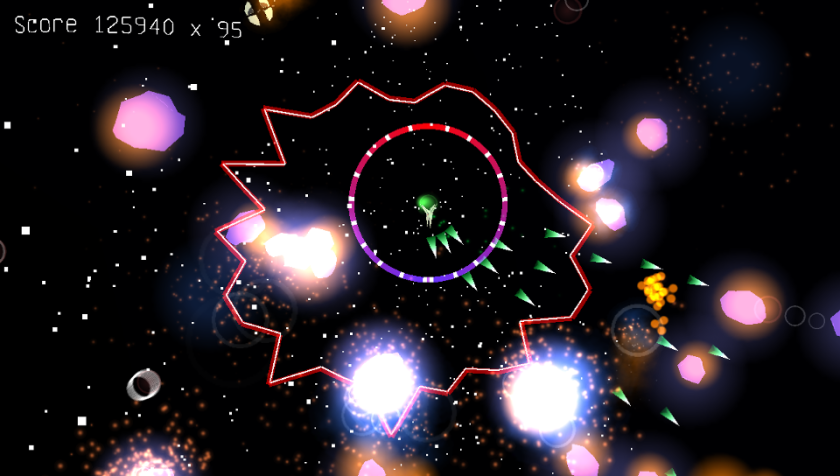 Son of Scoregasm looks and plays a little like a minimalist approach to Geometry Wars. Gameplay is your typical twin stick shooter type of affair, with enemies coming at you in certain patterns that differ per level – forcing you to change up your tactics often if you want to stay successful. The twist lies in the fact that just shooting aliens won’t net you a lot of points, but keeping an eye on your multiplier at the same time does.

There is a clever risk and reward system behind this concept, because upping your multiplier means letting your enemies get close before taking them down with a bomb that has a limited range. Take them out from afar with regular weapons and your score will be low, but you’ll likely stay safe. Let them come in close and you might walk away with a top score, but at the risk of your game ending prematurely.

This dynamic gives you the sense that pushing for a higher score is always within reach – and it’s a feeling that’s bolstered by the presence of an online leaderboard where you can see how much your current score is worth. Pushing higher means figuring out new approaches and strategies to levels you’ve tackled before, and this is where the real fun in Son of Scoregasm lies as beating the levels themselves is only part of the challenge. This challenge can be made harder or easier by flying into the corresponding gateways at the end of each stage as well.

Visually, Son of Scoregasm has to compete with the likes of Geometry Wars 3, which is also available for the Vita. It’s not a fair comparison, because Son of Scoregasm is essentially a one-man project, but it is worth noting that you’re getting a minimalist approach with the game. Think of it as a hybrid between the vector graphics of the Star Wars arcade game (from 1983) and Geometry Wars and you’re halfway there. There’s a distinctly indie/homebrew flavor to the game that not everyone will appreciate, but look beyond that and you’ll find a solid little twin stick shooter that’s very competitively priced. If you like that “just one more try at a higher score”-feeling, then this is for you.