The Scribblenauts franchise has finally returned, with the release of Scribblenauts Showdown for the Nintendo Switch, Playstation 4 and Xbox One. We played the game on a Playstation 4, which marks the series’ debut on a Sony platform as well.

Of course, it’s the Nintendo DS where Scribblenauts enjoyed it heyday, and it was a marvelous concept at the time. Using a stylus to write letters and words, you were able to conjure up objects to help you progress inside the game – and with absolutely tons and tons of creative solutions available to you it was easy to spend hours upon hours solving and re-solving the game’s puzzles.

Scribblenauts Showdown is far less focused on puzzle-solving and creativity, but it retains the original art style that previous games had. Instead, what you’re getting with Showdown is mostly a collection of minigames that are loosely inspired on Scribblenauts’ word play but in many cases just feel arcade-like (or Mario Party-like) instead. It’s still fun, at least at times, but it feels more like a spin-off than a proper Scribblenauts title.

It doesn’t help that the DualShock controller doesn’t allow for stylus-input, taking away some of the “magic” that came with the DS original. It helps explain why the development team went with the minigame approach, though it’s still possible to add objects to the game prior to starting some of them. And there’s a “sandbox” mode as well, which is actually the closest thing to the original puzzles/challenges and the most fun to play in single player mode.

The other two modes, Versus and Showdown, are best played with others. Versus gives you a random collection of minigames where you try to win more rounds than your opponent. In Showdown, this idea gets transplanted onto a game board idea – and this mode can be played by up to four players as well.

The actual minigames are broken up into two categories – wordy and speedy. Speedy games are very much arcade-like, with wordy games giving you the opportunity to be more successful by conjuring up in-game objects through words. You have this option in the more arcade-like games as well, but their impact feels negligible there. No matter which type of minigame you play though, it’s hit and miss when it comes to how enjoyable they are – they’re not as consistently good as those in the first Mario Party titles. 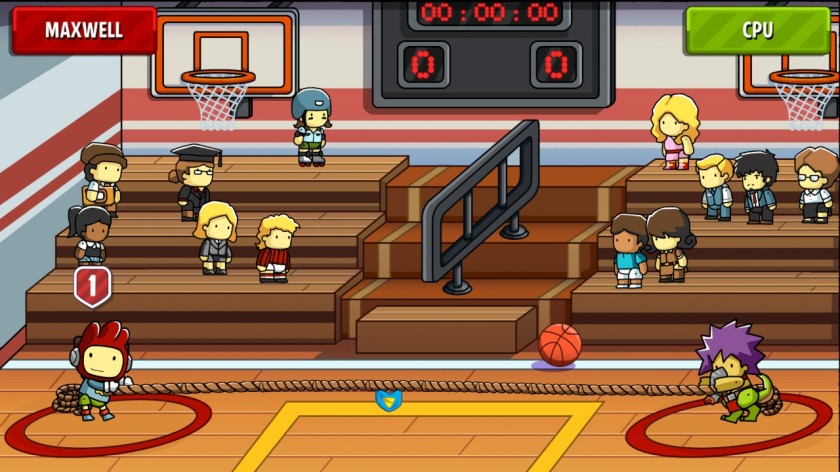 Sandbox mode is the most fun game mode, especially for Scribblenauts veterans who are interested in its unique brand of puzzle solving. Unfortunately, as the “Sandbox” name more or less gives away, it’s not as tightly designed as the original Scribblenauts challenges were. Instead, you get vague hints about what to do in each of its eight stages – and the Showdown/multiplayer aspect doesn’t always work either. It can be fun to solve things together, but a fellow player can also (un)intentionally ruin your chance of solving a puzzle. You can reset the puzzle when this happens, but it’s not always clear that this is what you need to do simply because the challenge itself isn’t always clear.