Fatshark has released their sequel to Warhammer: End Times – Vermintide, and Vermintide 2 offers more of the squad-based combat that made the original game so popular. Currently exclusive to PC, we took the sequel for a few rounds. And then some more.

Update: and then we played the Xbox One version when that came out 🙂

It’s been almost three years since we first heard about Vermintide, the videogame adaptation. In the summer of 2015 we had our first hands on session with the game, which immediately exposed how important it is to actually cooperate if you don’t want to have your game end prematurely. About twenty minutes into what was supposed to be a thirty minute mission, it suddenly was all over – but everyone was ready to go again and not make the same mistakes a second time.

That experience carried over to the final game perfectly, and it’s still here for the sequel. Four man teams still head into battle, and still have to play to each others’ strengths in order to succeed. In that sense, it takes the formula that Left 4 Dead made popular over a decade ago and brings it to a new generation of hardware and gamers – although I’m sure many former Left 4 Dead players have already flocked to Vermintide by now. 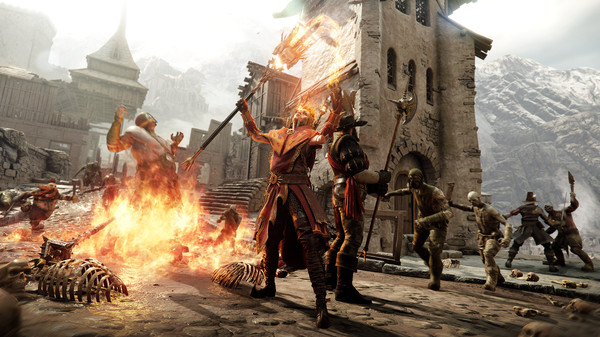 On the hero side, you’re looking at a choice between five different heroes – though things diversify further once you get into the game and start developing them. This happens through the ‘career options’ the game offers, which essentially give you sub-classes to choose from. This will (or at least should) affect your other choices as well, including which weapons to take into combat. Vermintide 2 has over fifty different weapon types, and although many of them are of the ranged variety you’ll definitely want a melee weapon in combat as well. The Skaven are back, and they WILL swarm you and get close.

The Skaven aren’t alone this time around though, as they’re joined forces with the Chaos warriors. These enemies are fewer in numbers, but make up for it in strength and their defensive capabilities. This is probably the biggest game-changer in Vermintide 2, as it forces you to cooperate in new ways and mix up your tactics dynamically depending on the foes you’re currently fighting. Where the first Vermintide game often had team members focusing on different waves of Skaven warriors, here you’ll find a greater need to join forces when Chaos soldiers start attacking your team. 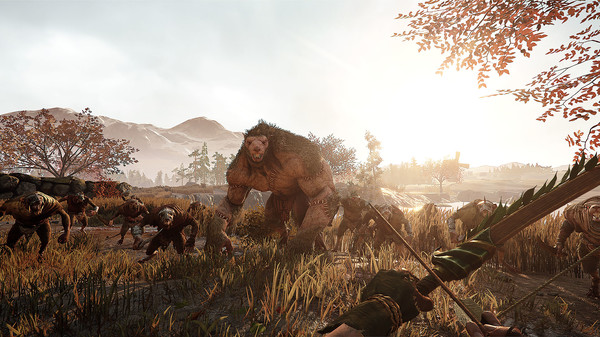 Also making battles more dynamic is the “heroic deeds system”. These are feats you can pull off, but in reality they’re temporary game-changers that give you mini quests that provide greater risks with a chance to also reap greater rewards. And speaking of rewards, there’s also no escaping Vermintide 2’s loot system – which we felt could mess with the flow of the game a little too much. Part of that is that there’s too much to deal with in terms of leveling up/developing your character, and often the payoff isn’t really worth it – or at least it doesn’t feel like it. I realize that part of that’s personal preference, as I’m not into crafting mechanics and also couldn’t care less about cosmetic upgrades – and Vermintide 2 has both. But even if you’re into these elements, the loot box system could definitely be optimized – which my fellow players were also keen to point out. At least Fatshark didn’t implement a microtransaction system, which is a big plus.

What’s also an asset to Vermintide 2 is that you don’t need much in the way or background knowledge on the Warhammer universe. In games likes Mordheim, it pays to have table top experience – but in Vermintide it’s really just used for the setting, making the game more accessible to team coop gamers. That’s not to say that the game is a walk in the park, since it’s actually extremely challenging due to the need to develop team tactics and the game’s knack for mixing things up in terms of enemy positions, formations and attack patterns.

Of course, many of these elements were also present in the first Vermintide game, which sparked some discussion on our end about how happy we would have been had Fatshark just released more DLC for that game instead. At the end of that discussion, we decided that unless they had added more races to the original game, the sequel is very much worth it. The new locations are something we already got from Vermintide’s DLC expansions, but the Chaos warriors mix up the core gameplay enough to make the game feel fresh and force us to reinvent our own strategies.

Update (July ’18): Having now played the game on Xbox One as well, it’s clear that Fatshark learned a lot from porting the first title to consoles. The process has been quicker this time around, and the experience is very similar to what you get on PC. Vermintide 2’s been popular and Fatshark hasn’t tweaked the formula much as a result, which unfortunately also means that the crafting/modding/rpg part of the game is still there in full effect – it’s just too much time spent in a UI for me, especially on a console. Still, plenty of gamers out there don’t object, so it’s probably just me. Performance on Xbox One is excellent and the game’s still every bit as good, so the score above stands.