Torn is a VR-exclusive take on the narrative puzzle genre by Aspyr, which we’re reviewing on Playstation VR today. It’s also out on Steam for PC-enabled headsets, as part of a simultaneous release.

The Aspyr name, for me at least, has always been synonymous with technical excellence. That may sound weird since we’re not talking about iD’s or Crytek’s engines, but whenever I saw a PC port bear the Aspyr name I was pretty convinced I was dealing with a quality port. For that reason alone, I was curious to see what they would be able to squeeze out of the (technically limited) Playstation VR.

In Torn, you play as a video blogger (how modern, right?) who comes across an abandoned house. It turns out the house once belonged to Lawrence Talbot, a renowned scientist who went missing over sixty years ago. The place is still littered with his stuff, and as you start exploring (because, with your job, how could you resist?) you quickly discover some of his experiments and details about what happened to Talbot. 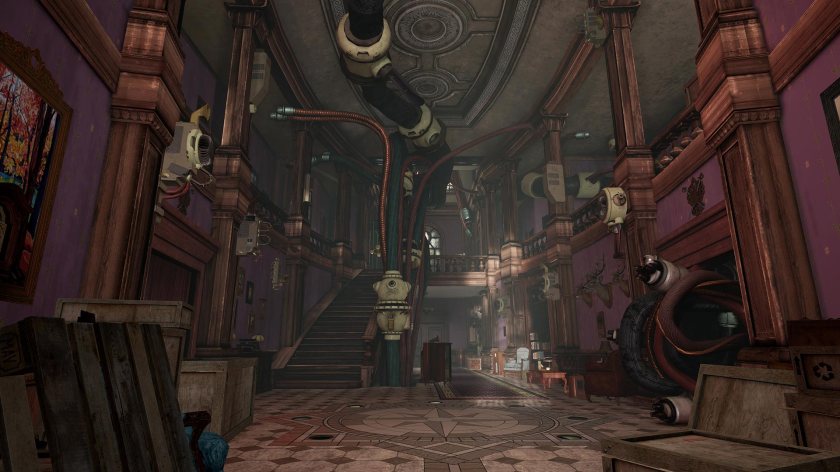 The story is full of mystery, dark secrets and even other dimensions, and it’s been very well delivered. Aspyr has crafted a visually gorgeous environment in Torn (which mostly takes place indoors), and it’s backed up by solid (voice) acting performances and a great musical score. Somewhere down the line, the game even dabbles into philosophical topics. It’s all very Twilight Zone-like in a way, and the narrative will certainly appeal to fans of that show.

Moving the game along is a series of puzzles, divided by eight large areas/rooms that together make for more than six hours’ worth of gameplay. The core puzzle dynamic involves an anti-gravity gun that you can use to move objects around and into the right spot, which is usually the key to any given puzzle. But no matter how audiovisually impressive Torn is, the puzzles often don’t go far beyond a standard “find the missing object and place it in the right spot” dynamic. I would have rather seen more variation or even some The Talos Principe-like conundrums, as Torn’s puzzles aren’t as impressive as its visuals. It doesn’t get in the way of enjoying the story and it’s often fairly casual stuff, but it does border on being repetitive even though the game also uses familiar mechanics like pressure plates.

Torn is controlled using a pair of move controllers which will act as your in-game hands, allowing you to manipulate and pick up things – though you’ll spend a lot of time using the gravity gun instead. As is the case with many Move-controlled titles, there is no smooth/free locomotion – Torn instead relies on a ‘click to turn’ mechanic. It breaks the immersion slightly, especially when you’re in a spot where you would like to take a step backwards and can’t – forcing you to either do walk in a circle or do a 180 degree turn, a step forward, and another 180 degree turn.

Ironically, even though I talked about Aspyr and their technical excellence, their first major VR title has a few issues on the technical front. It’s definitely one of the better looking VR titles to come out in recent months, but during my playthrough I ran into a few clipping issues as well as instances where the controls seemed to work against me – not allowing me to properly place an item where it needed to be. Both are far from game-breaking, but do hurt the sense of immersion when it happens.

Despite its small faults and so-so puzzle design, Torn is an audiovisually stunning and well-delivered mystery tale in VR. If you enjoy a more realistic looking and cinematic approach to VR, then Torn has you covered.