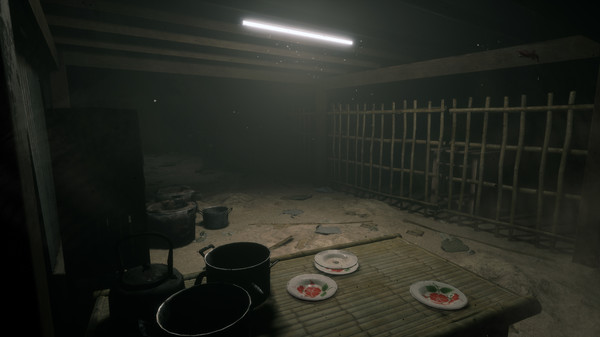 Home Sweet Home, by developer Yggdrazil and published by Mastiff, is now out on consoles after an earlier release on Steam. As with the PC version, the PS4 version supports VR, so obviously we played it with a Playstation VR headset.

When VR technology first entered into mainstream gaming, a lot of people were commenting on its potential to change the way we experience certain genres. First person shooting games came up, as did horror – and surprisingly enough that hasn’t really happened. Many of the most memorable VR titles are neither, there are only a few decent shooters that aren’t wave shooters or on rails, and for horror nothing really comes close to Resident Evil 7 – and that’s only available in VR on Playstation.

Home Sweet Home is a good attempt at tackling the horror genre though, and echoes some of the scariest bits in Resident Evil 7 at times. You play as Tim, who wakes up not knowing where he is and where his wife is – and his main goal is merely to escape the horror he just woke up in. Since you’re not armed, a lot of gameplay revolves around remaining unnoticed as supernatural foes lurk in the dark.

Based partly on Thai mythology both in terms of the story and the visual style, it probably comes as no surprise that a lot of “Home Sweet Home” feels a tad eerie and creepy, and its horror scenes doesn’t make too much sense from a narrative sense – a little akin to movies like The Ring and The Grudge. Yggdrazil seems to realize this, as you can find a lot of notes and audio logs in the game that help you piece together the story. Skip these, and the story will likely be lost on you and far less enjoyable.

Part of the reason for this is that Home Sweet Home is based around various different stories and myths, more or less mixed up and thrown together as they’re connected by Tim’s story. Obviously, this is a recipe for something that will seem nonsensical if you skip the narrative-driving collectibles in the game, as there is little in the way of handholding when it comes to story development.

Just like how a chunk of the game gets lost when you skip the written notes and audio recordings in the game, you’ll also miss out if you don’t play Home Sweet Home in VR. As a game that relies heavily on a tense and creepy atmosphere, the addition of VR greatly enhances the experience as you’re sneaking around, listening to what your enemies are doing, or suddenly get discovered and have to try and scramble to safety or meet your demise. It works without VR, but it’s so much better with it.

Enemy designs are limited to about a handful of opponents that you’ll keep running into, and I would have enjoyed a bit more diversity over the course of the game’s four to five hour campaign. I did enjoy how they had the ability to work together though – for example with creatures sounding an alarm when they see you, only to alert stronger enemies. This immediately creates a sense of panic as you dread what’s coming….

As we approach Halloween, Home Sweet Home is definitely a horror title worth playing and a great first foray by Yggdrazil. It’s meant to be the first game in a series, so hopefully we’ll hear more about a follow-up in the not too distant future. For now, it’s back to the shadows as I watch a few other players get spooked.