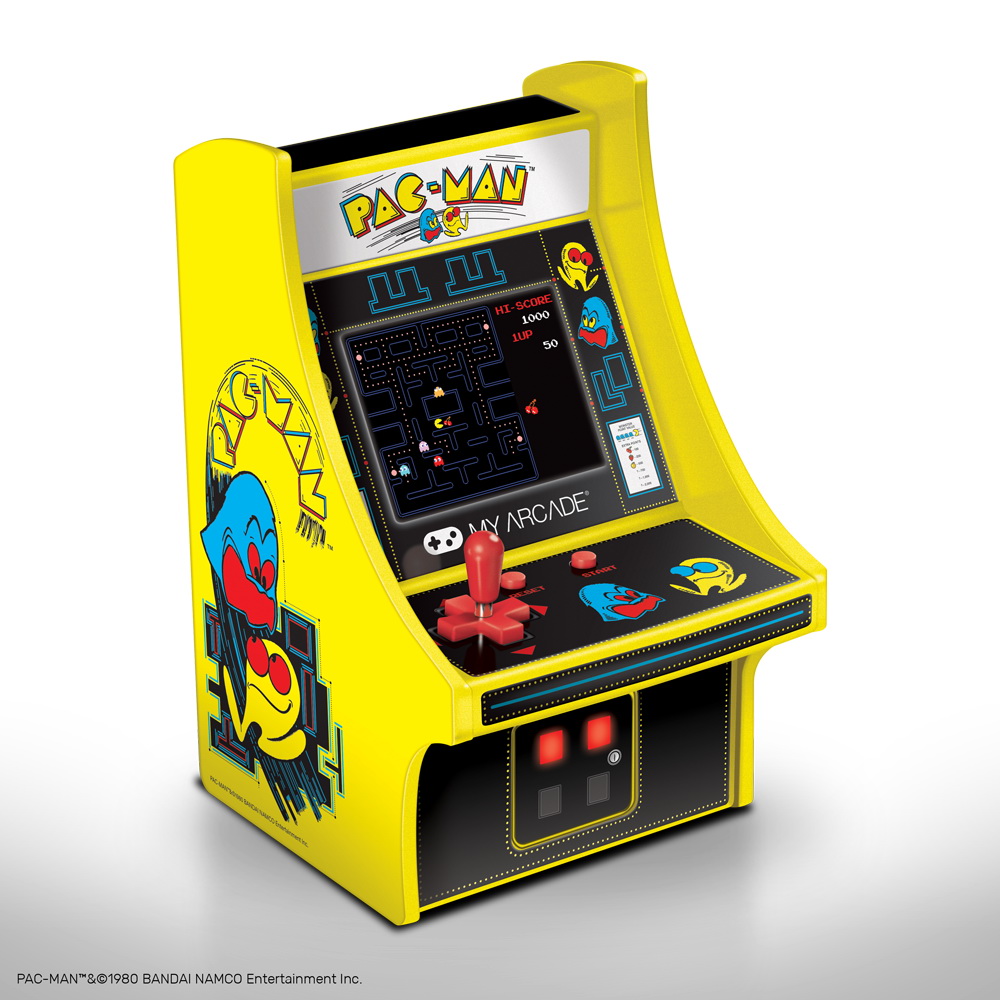 With the holiday season quickly approaching and game releases coming at a rapid rate, we take some time to realize that it’s also that time of the year where we look at interesting gift ideas. Today, we check out a trio of My Arcade’s Micro Arcade Players – and find out why they’re worth owning if you’re a retro gaming fan (or worth picking up if you know one!).

For this review, we checked out three classic Bandai Namco titles: Galaga, Dig Dug and Pac-Man. My Arcade, the company that’s putting out these miniature arcades, previously released a series of Data East-licensed titles (including Burger Time) as well, but this year they’re also bringing their Bandai Namco range to the market. The US got them a few months ago, but European gamers can now also get their hands on them.

Featuring a similar physical design, all three cabinets are a mere 6.75 inches (about 17cm) tall and have a 2.75 inch (about 7cm) full color screen inside them. As a frame of reference, this is comparable to the Nintendo DS’ 3 inch screen, and definitely big enough to accommodate these classic games that don’t feature a ton of visual detail that would get lost on too small a screen.

Before we check out the units in more detail, however, let’s look at what you get. Each Micro Arcade Players comes gorgeously packaged, with a see-through plastic/cardboard case. The plastic gives you a great view of the miniaturized arcade from the front and sides, but the box itself has a few nice design touches to it as well. It’s covered with art work either directly lifted from the arcade bezel or frame or heavily inspired by it, and includes general information about the game’s history on the side as well.

Galaga’s box is especially nice, as it features some sprite art on the front and has a nice Galaga-style frame around the game information as well. The back of each box has the unit’s specifications and features listed on it, in several languages, so nothing too surprising or exciting there. The front and sides look great though, and make these Micro Arcades wonderful to put on a retro gaming shelf – even if you never end up opening or playing them.

Obviously, that’s not how we planned on using them, so we opened up the boxes to take a look at what’s inside. Besides a small manual and product leaflet, it’s just the micro arcade unit – it doesn’t come with the cables or batteries required to run it. If you go wireless you’ll need 4 AA batteries to run it, or you could connect a standard micro usb cable to achieve the same goal. The system’s not very power hungry, as it ran just fine using a standard USB port on a laptop or computer and didn’t need to be connected to a wall outlet.

All three Micro Arcades are light in weight but relatively sturdy in build. There is a headphone jack on the back of the unit which is probably going to be very useful if you’re not planning on playing alone, and there are volume buttons right next to the jack. The default volume (coming out of a speaker on the back of the unit is fairly high, so you’ll probably reach for these quickly.

On the front of the machine, the place typically reserved for the coin slots and door is used as a cool-looking on/off button. Pushing the little “door” inward powers up the game screen, and as an extra little touch it also lights up the coin slots (as would typically happen on a real arcade machine as well). In theory, this would allow you to just run the unit in attract mode and look cool doing it, but it’s hard to resist some actual gameplay when it’s right there in front of you.

Controlling each game is done with a miniature d-pad or joystick, combined with start/select buttons and an action button (which is missing on the Pac-Man unit for obvious reasons). When I mention d-pad or joystick, I mean that you have a choice between the two – a small stick detaches from the unit to allow for d-pad control, and you can easily screw it back on if you want to revert to joystick control.

One feature that’s not included is the ability to hook up your Micro Player to a TV and play one of the classics that way. Not surprisingly, this also means you don’t have an option to connect a customer controller and play that way either. My Arcade’s units also don’t have a built in battery for you to recharge, so if you don’t want to rely on (spare) batteries then make sure you have access to a USB cable and slot.

The color screen is bright and vivid, making for a very clear image. Purists might miss the old fashioned monitor-fueled scanlines here, but I thought the display really popped. It’s another example of where the technology and design behind the Micro Players makes them look great even when they’re not being played with, but it’s also something that helps the in-game experience. Galaga will always be kind of a dark game (visually), but Pac-Man and especially Dig Dug look quite vibrant on the small screen. 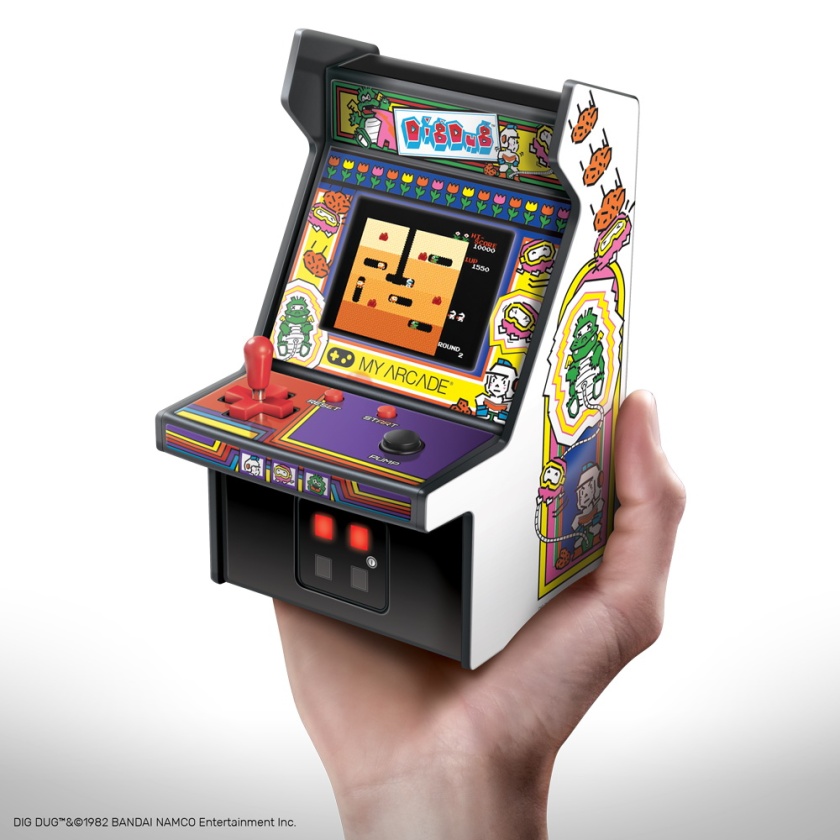 The controls are less than ideal though, mainly because of how much they shrunk down the cabinet and thus the controls. Things feel less precise than they do with a full sized arcade controller or even a gamepad, and it doesn’t matter if you’re using the joystick or d-pad option. For some of us, the d-pad also felt awkwardly positioned, as your thumb has to control it while resting on the raised side panel next to it (see the pictures for what I mean). I wouldn’t expect anyone to get a “perfect Pac-Man score” anytime soon on these, so if you’re competitively inclined then perhaps these aren’t the units for you.

The games themselves feel like faithful recreations or the original ones, which is of course a major part of the experience. The sounds feel a bit “off”, but that’s probably at least partly due to the use of the small speaker on the rear – the games all sound better when using headphones.

The My Arcade Micro Arcade machines based on these classic Bandai Namco games are wonderful collectibles for retro gamers. The miniaturized arcade machines look great in the box, and even better with the screen and coin slots all lit up. There are better ways out there to play Pac-Man, Dig Dug and Galaga though, including Bandai Namco’s own “arcade game series” on the PSN network and various other re-releases for the big and small screen. However, none of them look this cool on a retro gamer’s shelf, and the fact that these are fully working units should maybe be seen as a bonus. Don’t get them as a way to play these games, get (of gift) them as a way to relive a part of gaming history.

One thought on “My Arcade Micro Players review (arcade)”