A few weeks after it left early access on Steam, Sólfar Studios has released In Death for Playstation VR. A roguelike shooter that takes place in the afterlife and emphasizes combat with bows and arrows, we faced the game’s demons head on.

We never tried Sólfar’s first release on Playstation VR, which was Everest VR – a simulation of what it’s like to be up on the fabled mountain. Since that wasn’t strictly speaking a game in the traditional sense, In Death’s kind of a debut title then. It clearly shows that Sólfar’s experience with Everest helped them though, as In Death is a game that’s extremely solid in terms of technical performance and the versatility of its controls.

A first person shooter of the roguelike variety, In Death finds you in a version of the afterlife where things have gone haywire – and it’s up to you to restore order. Heaven (or Purgatory) looks a bit like a medieval city with subtle hints of sci-fi (mainly through the use of teleportation) and a great use of light and dark. When out in the open, the environment will have a white-ish hue about it – but things get dark and moody once you venture into some of the foreboding interiors of the game. 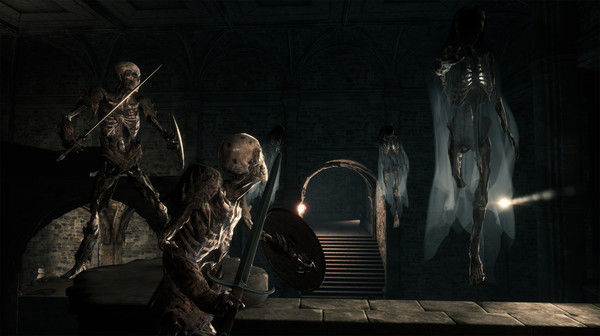 Using the Unreal engine, In Death looks great even with the limitation of Playstation VR when compared to the PC-based version. Because of its roguelike nature there’s some repetition in its visuals after a few playthroughs, but everything looks very detailed – from the backdrops to the architecture and the enemy designs.

Being a roguelike title, every run ends with the ability to unlock new skills and perks, sometimes at the expense of others (getting stronger can mean that your opponents will too). Some of the more useful upgrades include new arrow types (such as explosive ones) or even weapons, and you’ll be able to switch to a crossbow before too long. This changes the gameplay drastically, as you no longer have to use a slow-ish two-handed method of firing a bow and arrow. Even the crossbow comes at a price though, as it doesn’t pack as much of a punch as the bow and arrow do.

Each run and level is procedurally generated, meaning every run will be different and your learning curve doesn’t kick in until a little later. Eventually, you’ll start to figure out how to best position yourself and make use of enemies and their combat styles to your own benefit. For me, this meant making much better use of the shield I had with me, as it felt like a better way to stay alive than rapidly moving around, which is how I initially played. Other players might have different experiences of course – In Death doesn’t dictate a singular way to play.

In Death has multiple movement methods, though I stuck with the two included movement modes that involve teleportation. Using a bow, you can fire teleportation arrows to travel large distances – though you can also use small shards to quickly move out of the way of danger over a short distance. A form of free locomotion is also supported (walking forward, then turning), but I found the game to be too hectic and difficult to also cope with that dynamic. More skilled players might feel different, so it’s great that Sólfar includes options for everyone.

The game’s extremely challenging, even with the upgrades (some of which can also be enabled in-game rather than in between attempts). This will no doubt make it an overwhelming experience to VR novices, especially if you’re relatively new to motion controls as well – as using the bow and arrow takes a little practice. It’s a lot of fun once you get comfortable enough with it though, and part of me wishes that Sólfar had included some kind of story driven action RPG mode with the game as well. It would have served as a great tutorial, while at the same time offering a change of pace from the onslaught that is its roguelike core. Still, for those who enjoy a challenge of that kind, In Death is very well crafted, even if the Playstation VR version misses out on the benefits that PC gamers with roomscale functionality have in a game like this. The team took the system’s limitation, however, and crafted an excellent shooter within its boundaries.

One thought on “In Death review (PSVR)”