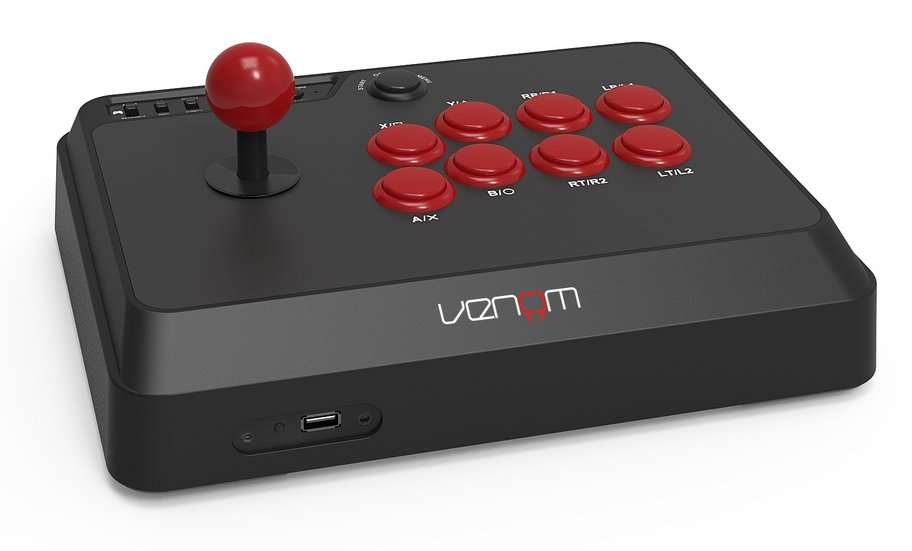 Through re-releases of classics as well as through brand new (indie) titles, there are plenty of arcade-inspired titles to play out there these days. The problem is that, if you’re a fan of that classic kind of experience, these games are spread across a multitude of systems. The Venom Arcade Stick doesn’t just fix that problem, it also gives you access to genuine arcade-style controls as an alternative to the modern day gamepad.

Compatible with Xbox One, PS4 and PC (as well as other systems, which I’ll highlight later), Venom’s Arcade Stick is reminiscent of Mad Catz’ excellent fight sticks, but with a few important differences. At 12.6 by 10.2 inches, it’s quite a bit smaller, and it has a black finish instead of a licensed (think Street Fighter or Tekken) look. Probably no big deal for those who aren’t exclusively playing fighters, and of course the Venom stick can still be played with your fighter of choice.

Two other big differences are related to one another. The Venom stick doesn’t feature Sanwa Denshi components, just like the more recent “Alpha” version of Mad Catz’ fightstick. Not using these high quality Sanwa parts is a compromise, but it also means that Venom’s Arcade Stick is available at about half the price of other sticks – and you get a ton of versatility in return as well.

If you insist on Sanwa parts, or aren’t happy with the feel of the included buttons, then the Venom stick has been designed to be compatible with Sanwa Denshi buttons and joysticks as well – meaning that you can swap them out for genuine Sanwa parts if you want and don’t mind the extra cost. Obviously you could also buy a stick that has them built in to begin with, but if you like the Venom hardware well enough to begin with then that’s a nice bit of money saved.

Alternatively, if you only play classic games, then you’ll just need to replace about two or three buttons anyway – and this is where the stick’s versatility comes in as a retro controller rather than a bulky controller just for fighting games. On Playstation 4 and Xbox One you’re somewhat limited when it comes to decent classic arcade games, unless of course you count the many indie titles that were inspired by them. Sine Mora, Sky Force and Dariusburst are all great examples of games that bring that arcade feel back when played with an arcade stick like Venom’s, in case you need a few suggestions. I believe the stick’s also compatible with PS3 and X360, so that helps, though I didn’t have a chance to try that out.

On PC, you have a much larger catalogue of games to choose from, since modern PCs (sometimes with a little tweaking) can run most games released since the Windows 95 era. And if you’re handy, then emulators like Dosbox can take you even further back – though that will only gain you access to PC ports of older games. If you want real arcade games at home then you can either look into options to run those on your PC (and control them with the Venom) or build your own mini-PC, which many hobbyists have already done with a Raspberry Pi kit. And yes, even those support the Venom stick right out of the box.

While the stick is fully “plug and play” on systems that resemble some kind of PC setup, there’s a bit more work involved when getting the stick to work on a console system. It doesn’t require any technical wizardry though – all you need to do is connect a regular controller to the Venom stick using an included (and standard) cable, and it’ll work. It reminded me of easy PC-based gamepads that acted as a passthrough between computer and keyboard, emulating keyboard presses instead of properly working as a standalone controller. The Venom stick doesn’t require any kind of configuration though – connect it the right way and you’re good to go.

So where does that put the Venom Arcade Stick? I’d say it’s a perfect entry model if you were considering trying out a more arcade-like controller, especially for retro gaming and if you were dreading the cost of similar products. With the versatility that Venom’s multi-platform version offers, you’ve got a wide range of possible uses – and I feel Venom’s selling its own product short by labeling it as a “fight stick”. Fighting game purists will likely not object to the premium price tag that other sticks carry, and Venom’s product’s greatest asset is versatility with a limited cost factor. I know we’ve been having a blast trying out some classic arcade games by booting up titles like Capcom Classic and Namco Museum – introducing a new generation to classic games in a way that’s very similar to how they used to be played. Getting that experience for a fraction of the price (and storage space) of an arcade cabinet is well worth it in my book, especially if you have access to a hassle-free (non-PS4/Xbox One) system to plug the stick into.