Developed by Friend & Foe Games, Vane is one of those rare PS4 exclusives that’s not a first party title. With a team that features some of the talent behind games like Killzone and The Last Guardian, it certainly caught our interest. Here’s our review.

When looking at the studio’s combined resume, The Last Guardian definitely jumps out as the most obvious source of inspiration for Vane, although that game was more narrative-driven and Vane more closely resembles something like Journey in how it encourages exploration. The resemblance to The Last Guardian lies in Vane’s beautiful audiovisual and unique style, which echoes the likes of Rime and Journey retaining a character of its own.

Not offering much in the way of a narrative or dialogue, you’re quickly left to explore Vane’s world and your purpose in it on your own. You do this as a bird, but it doesn’t take long before you use your ability to magically transform into a boy and see and discover the world in a different light. As you encounter dramatic weather changes, dark caves and mysterious mechanical contraptions you can’t quite figure out, exploration quickly becomes a goal in and of itself.

This is partly because there are plenty of sections in the game world that feel relatively empty, so your urge will be to try and find the next puzzle. Things become more focused and linear later on (in an adventure that’s about four hours long), but this is where Vane also loses some of its charm. This isn’t necessarily because the exploration is so great, but because the core dynamic of changing from bird to boy form isn’t used enough and some of the challenges you have to overcome feel like they have solutions that are so random that they come about almost as if by chance. 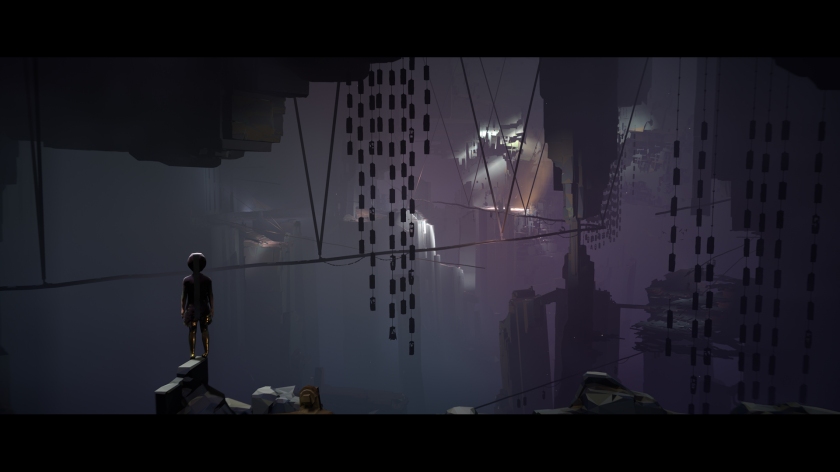 Besides switching the two forms, there are also sections where other characters help you out with certain puzzles. Or they’re supposed to, because Vane has a few annoying glitches in its AI and control system that can force you to start a whole section over again. There are a few visual issues as well, but it’s easier to forgive a small clipping problem here and there than an issue that forces you to replay a puzzle that wasn’t too great to begin with.

In the end, the various issues that Vane suffers from give you the idea that this is a game that could have used a bit more time in the oven. Having said that, I doubt that more time would have made the game rise to the heights of the titles that inspired it – its gameplay mechanics aren’t nearly as intriguing as those in titles like Journey, or something like Ico. The gorgeous audiovisual style (the soundtrack is excellent as well) make up for a lot, but can’t hide Vane’s shortcomings.